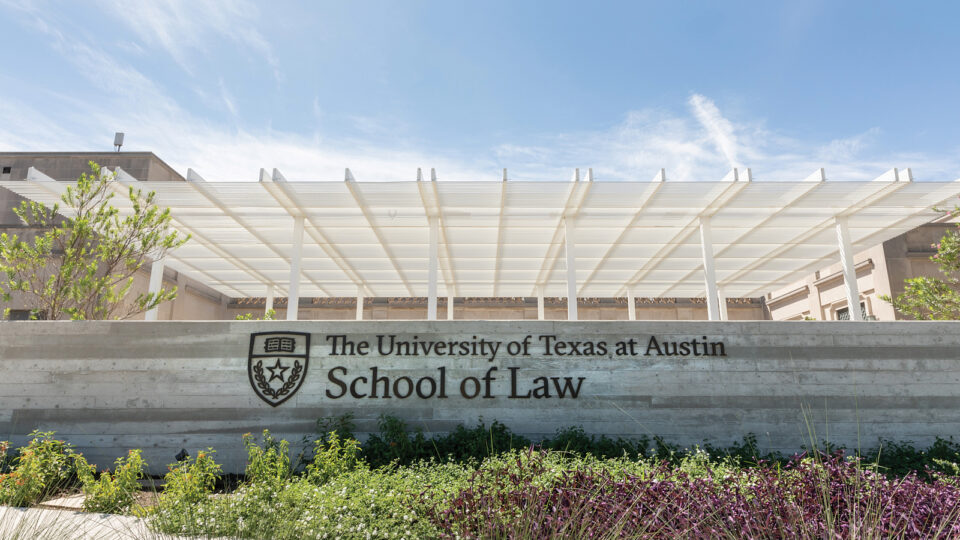 New Courtyard and Plaza Give the Law School a New Look

This article is reprinted with permission from the Alcalde, the official publication of the Texas Exes.

Not so long ago, driving along the northeastern corner of campus, it was easy to miss the brutalist white stone structure at 727 East Dean Keeton. That’s Townes Hall, home of The University of Texas School of Law. However, thanks to last year’s revamp of the 14,281-square-foot courtyard and plaza on the building’s north side, no one traversing this street—which owes its namesake to one of the foremost experts in tort law, former Texas Law dean W. Page Keeton—can claim ignorance any longer.

New signage proudly and prominently demarcates the law school from the residences across the way, and two open-air steel canopies provide a striking visual element reminiscent of an old-timey courthouse supported by colonnades (a decidedly modern interpretation, anyway). Last May marked the soft opening of the space’s first major zhuzh since the early 1980s, back when Elizabeth Warren was on campus teaching bankruptcy law.

Now known as the Dee J. Kelly Courtyard and Patman Family Plaza (the donors supporting the project include three current or former trustees of The Law School Foundation, and Texas lawyers with deep ties to Texas Law and the university), it was designed by Barnes Gromatzky Kosarek Architects, the same firm behind the Texas School for the Deaf and Austin Community College’s award-winning transformation from an indoor shopping mall into its Highland Campus. The goal was to give what was previously an unshaded, hidden (by overgrown crape myrtles), and somewhat severe concrete pass-through space a facelift that is functional, comfortable, and handsome.

It’s an al fresco environment that, thanks to cooling and shade elements, and movable, café-style and communal seating, encourages lingering for socially distanced meetings and gatherings. Coincidentally, the design is primed for this moment, when, vaccinated or not, many folks prefer gathering in comfortable outdoor settings. As Dean Ward Farnsworth says, “When we first planned this project, COVID didn’t exist. But these spaces have been especially helpful in a time when the virus is so challenging for everyone.”

What was once a liminal thoroughfare more suited to those bustling through with briefs is now an atmosphere conducive to community building at a time when students are especially hungry for just that. The courtyard and plaza were designed with students in mind, first and foremost.

In 2019, when the project commenced, the project manager, Keith Pinkelman, drove to campus and snapped the legs of a card table into place, lining it with snacks. He spent a whole afternoon in the former courtyard chatting with law students, asking what was important to them. Some of the requests they shared were granular, practical—like the charging stations scattered throughout the courtyard and plaza, and the seamless Wi-Fi, so that any and every spot is a viable place to meet up, work, study, or all of the above.

The redesign is highlighted by two white-painted steel canopies, which provide not only rhythm and balance, but a support system for lights and infrastructure, as well as much-needed shade, transmuting the Texas sun into a softer glow. There are Big Ass-brand industrial fans (the kind you see hanging from restaurant and gym ceilings) in the courtyard area—which Farnsworth calls miraculous. “They make it comfortable to sit outside even on a 90-degree day,” he says.

The past two years have been tragic and heavy, the quiet campus a sign of all that was missed, the relationships not being built. “These spaces used to have very few people in them,” Farnsworth says. “Now they almost always do—they’re abuzz with life.”

Marissa Elder, a 3L (third-year law student) and president of the Texas Law Student Bar Association, hopes the new courtyard will help things get back to normal. “Getting back to the Texas Law community, which is what we all are craving and wanting … it’s really a symbol of what’s to come,” she says.

Last spring, the class of 2021 engaged with the redesigned space for the first time, grinning in graduation gowns and giving the hook ’em hand sign in celebration of their new law degrees. On Instagram, posing underneath a trellis of orange and white balloons and the old inscription on Townes Hall, “That they may truly and impartially administer justice,” most of the graduates’ photos are cropped close to show off diplomas, smart business suits, proud partners, and parents. You can’t quite make out the new space, but it’s not because it’s hidden. It’s just fully inhabited.

This article originally appeared in the Alcalde, the official publication of the Texas Exes. Read the original story.

Category: At the Law School