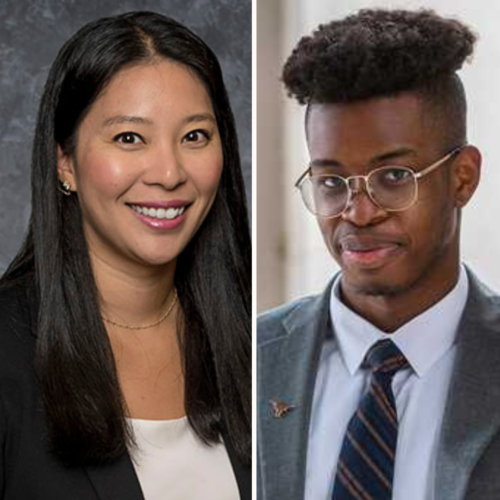 Texas Law students Diana Kensy (3L) and Jason Onyediri (3L) have been selected as Susman Godfrey Prize winners, which are presented annually to 12 law school students of color from around the country who have demonstrated academic excellence and overall achievement. The award is open to students who are finishing their first or second year of law school; it includes a $2,500 award and an offer for a 2023 summer clerkship.

Kensy is an articles editor of the Texas Law Review and a member of the Texas Law Veterans Association. She previously served as a Medical Service Corps Officer in the U.S. Army and deployed on a combat tour to Afghanistan. Diana also volunteered as a sexual assault victim advocate during her military service. She earned her bachelor’s degree in Life Sciences from the United States Military Academy, where she was recognized as a Distinguished Honor Graduate.

Onyediri is the editor in chief of the Texas Law Review for 2022. A 2020 graduate of UT Austin, he earned undergraduate degrees in both biochemistry and philosophy. Onyediri, a Houston native whose parents are Nigerian immigrants, was actively involved with the Texas Undergraduate Law Review. He served as a head editor during his senior year on the Forty Acres after being a contributing editor and writer.

To be considered for this award, students had to be nominated by a law school professor or administrator. Nominees were evaluated based on their respective resumes, transcripts, and letters of recommendation. The group of 73 nominees was narrowed to 26 finalists, then 12 winners representing law schools from around the country were selected after a virtual interview with attorneys from the firm Susman Godfrey. The award was launched in 2021 to increase the pipeline of diverse attorneys interested in civil trial litigation.