Tug-of-war may have been rained out at the 2013 Society Games, but it hardly dampened the competition and spirit of the annual field day where dozens of law students gathered for an afternoon of fun and games. A community-building and recreation component of UT Law’s Society Program, the annual Society Games pit eight teams of […] 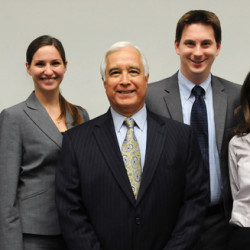 In February, students from the Sheffield Society met with Judge Edward C. Prado, U.S. Court of Appeals for the Fifth Circuit. Prado, a 1972 graduate of the Law School, serves as the community fellow for the Sheffield Society, which is one of eight societies in the Law School’s Society Program. Prado was joined for the talk by his current law clerks, Derek Linkous, Michelle Parthum, Amit Vora, and Alex Zolan, as well as third-year student Kate Nanny, ’12, who will clerk for Prado after graduating from the Law School.