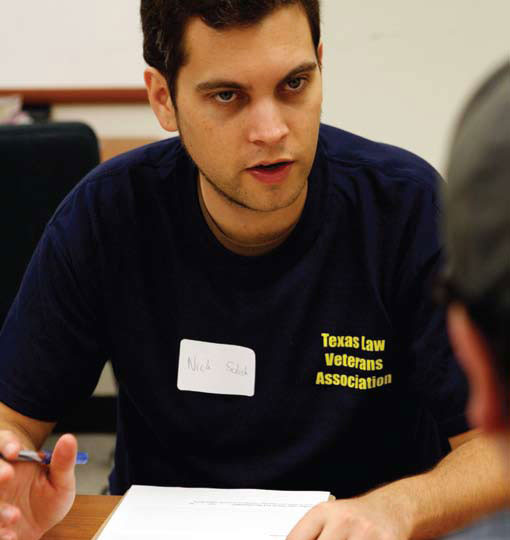 Help on the Homefront

During wartime, everybody wants to support our troops. But what happens when they’re not troops anymore? Once they take off the uniform, veterans face many challenges as they reintegrate into the civilian world. There can be difficulties returning to the workplace. Some have service-related disabilities. Others must deal with family issues brought on or exacerbated by long overseas deployments.

When veterans need help with these or other problems, UT Law student organization the Texas Law Veterans Association (TLVA ) is there to help Central Texas veterans learn about their rights, apply for benefits, and find attorneys.

The TLVA got its start in September 2007, when cofounders Sam Denton, ’10, and Bridgett Mayeux, ’10, were discussing what they could do to commemorate the anniversary of the 9/11 attacks. Veterans themselves, both having served in Iraq in the Army and Air Force, respectively, they hit upon the idea of putting their skills and training to work helping veterans of the conflicts in Iraq and Afghanistan.

“Veterans are getting out of the military in record numbers, and the majority of them go to either Texas or California,” said Denton, a former TLVA president. “There are all sorts of issues they experience as they get out, and many of these veterans need help. We want to make sure they get the benefits they deserve, and a lot of times that means just making sure they fill out the paper work correctly.”

According to Victor Polanco, office supervisor at the Austin office of the Texas Veterans Commission, an organization that provides services and lobbies for Texas veterans, Texas currently has 1.7 million veterans, and many of them are drawn to the greater Austin area.

“Central Texas is really booming because to the north we have one of the biggest bases in the country at Fort Hood and to the south we’ve got four bases in San Antonio,” Polanco said. “We’re right in the middle, and so we get a lot of them here. At my office in Austin, we see an average of fifty to sixty veterans a day.”

Polanco, whose office helps veterans apply for benefits, says the claims process can be daunting. Veterans are required to submit a variety of forms with their initial claims and, if benefits are denied, appeals can drag on for years.

“Right now, with the economy the way it is, we’ve got a lot of veterans coming in that have never sought help before,” Polanco added.

Sometimes veterans need legal assistance to get the services and benefits they have earned. That is where the TLVA has stepped in to provide support. The TLVA sponsors free legal advice clinics in concert with the Law School’s William Wayne Justice Center for Public Interest Law; Volunteer Legal Services of Central Texas; the Texas Veterans Commission; and Travis County Veterans Services. Ryan Glover LLP also contributed funding for the clinics.

“The students were interested in doing something for the veterans,” said Trish McAllister, executive director of Volunteer Legal Services of Central Texas. “We wanted to figure out a way that we could help and that would be meaningful, so we decided we would start doing the advice clinics. Not all the cases are specific to veterans only—there are a lot of family law cases, housing cases, and things that are more typical of the general population.”

TLVA members work with volunteer attorneys at the advice clinics, provide information, and steer veterans toward available resources. Depending on the demand for assistance, the TLVA hopes eventually to have three clinics per year.

Each client also has an opportunity to speak with an attorney from Volunteer Legal Services for a limited time, typically fifteen minutes or so. By gathering relevant information in advance and accompanying the veterans to the attorney visit, the students help the client make the most of it.

“The students stay with that veteran when the attorney talks to them, so they get the whole experience,” McAllister said.

To familiarize themselves with veteran’s issues and learn how they could better provide assistance, the TLVA conducted a symposium, “In the Boots of a Soldier,” during the spring 2009 semester.

“We put together a program looking at a fictional soldier, ‘Staff Sergeant Bevo,’ to illustrate the issues veterans face,” said Cody Cheek, TLVA ’s 2009–2010 president. “Sam and I came up with a list of topics that we thought were most relevant, and tasked them out to members to research and prepare presentations. If we are going to put on these clinics, it’s important for us to educate ourselves in the area.”

While focusing on the needs of veterans, TLVA membership is not limited to former members of the armed forces.

“With concurrent wars in Iraq and Afghanistan, a lot of people know or have a connection to someone who has served in the military,” Cheek said. “While they might not have served themselves, they respect and have a desire to help those connected with the military. So it has not been hard for us to find students willing to step up and volunteer.”

In addition to helping veterans, the legal clinics also introduce students to public service practice, an exposure that should pay dividends long after they graduate from the Law School.

“This TLVA project gives students a great opportunity to work with pro bono attorneys and learn first-hand about the unmet need for legal services in our veteran community,” said Professor Eden Harrington, director of the William Wayne Justice Center for Public Interest Law at the Law School. “I believe this kind of rewarding experience helps encourage students to do more pro bono work, both now as students and later as attorneys.”—Tom Gerrow