An Interview with Karen Engle on her new book on indigenous rights and international law, The Elusive Promise of Indigenous Development: Rights, Culture, Strategy

Karen L. Engle, Cecil D. Redford Professor in Law and director of the Bernard and Audre Rapoport Center for Human Rights and Justice, has written a new book, The Elusive Promise of Indigenous Development: Rights, Culture, Strategy. The book was published in fall 2010 by Duke University Press. 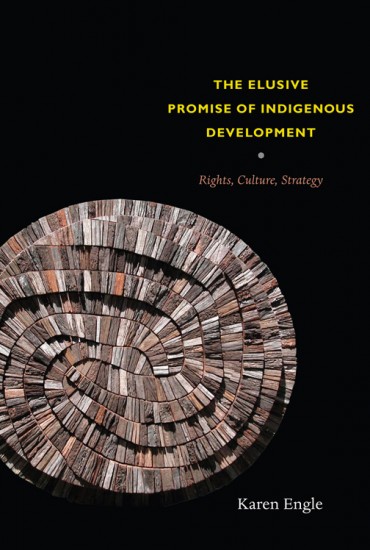 In the book, Engle traces the history of indigenous peoples’ uses of international law to make claims for heritage, territory, and economic development, considering the prevalence of particular legal frameworks and their costs and benefits for indigenous groups. Her account highlights the dilemmas that accompany various legal strategies, as well as the persistent elusiveness of economic development for indigenous peoples. Focusing primarily on the Americas, Engle describes how cultural rights emerged over self-determination as the dominant framework for indigenous advocacy in the late twentieth century, bringing unfortunate, if unintended, consequences. She contends that by asserting static, essentialized notions of indigenous culture, indigenous rights advocates have often made concessions that threaten to exclude many claimants, force others into norms of cultural cohesion, and limit indigenous economic, political, and territorial autonomy.

Engle explores one use of the right to culture outside the context of indigenous rights, through a discussion of a 1993 Colombian law granting collective land title to certain Afro-descendant communities. Following the aspirations for and disappointments in this law, Engle cautions advocates for marginalized communities against learning the wrong lessons from the recent struggles of indigenous peoples at the international level.

Monica Medel: Why did you decide to start this book project?

Karen Engle: The book actually started as part of another project, which was on the tension between international human rights and culture. In 2000, I wrote a short piece that included a comparison of women’s human rights and indigenous rights advocacy. I was struck that while women’s rights advocates tend to see human rights and culture as oppositional, indigenous rights advocates seemed to have mediated the tension by advocating for a “human right to culture.” I decided I needed to unpack the meanings of culture in that advocacy, and consider how and why it is used to claim protection not just of heritage, but of collective land and indigenous economic development. A central question of the book is whether the right to culture is up to the task of such redistributive aims.

MM: It seems that the book is aimed not only at international lawyers, but at anthropologists. Why?

KE: Well, there is another story I could tell about the beginning of the book, which is that I started writing up the project in response to over two decades of interdisciplinary conversations about law in which I have been engaged. I have often found that scholars who are critical in their own fields are reluctant to be critical of law. In the context of indigenous rights, many of the same anthropologists who have influenced me through their critical and anti-essentialist work discuss the law as though it were static and—for the sake of strategy—often affirm overly romanticized understandings of indigenous peoples in the legal forums in which they participate. I suggest that in doing so, they participate in the production of the very legal rules they blame for such strategy. The book urges lawyers and anthropologists alike to at least pause to imagine what might happen if we stopped relying on overly essentialized stories about indigenous peoples and, instead, focused on the vast inequality in the distribution of wealth and resources that at least partially originally motivated international indigenous rights advocacy.

MM: How does this relate to your discussion about strategy?

KE: I’m trying to demonstrate the unpredictability of strategy in the book. You can never know exactly where any particular legal or political strategy might end, which is why even most apparent successes have unintended consequences—sometimes positive and sometimes negative. If social movements get too attached to a particular strategy, they lose the possibility for experimentation, for imagining new legal relationships.

MM: Why do you think the book is relevant?

KE: I think it is relevant to a number of contemporary developments of indigenous rights in international and regional law and institutions, from the World Bank to the UN and the inter-American system of human rights. Let me offer one example. The Inter-American Court of Human Rights has arguably very good case law recognizing the collective rights of indigenous groups to lands they occupy or use, even to land from which they have been displaced. It is being applied to certain afro-descendant communities as well. Although the jurisprudence is seen by many as the most progressive jurisprudence regarding indigenous and afro-descendant peoples, I think that there are significant limits to it. It in fact only applies to a small percentage of afro-descendants and indigenous people because those who are most likely to succeed in their rights claims are those who are able to prove historical and cultural attachment to particular land. Moreover, the rights they receive are often limited. They might, for example, achieve the right to occupy—even own and develop—particular land. But they only (and only recently) will be guaranteed rights over the natural resources if they can show that they have traditionally used them. Thus, the advocates’ own quite successful use of the right to culture has come back to limit the possibilities for indigenous development.

MM: As a part of your book you traveled to Colombia. Why Colombia?

KE: I originally went to Bogotá in 2007 during a leave in which I planned to finish the manuscript. But when I was there, I became aware—for a variety of reasons—of afro-descendants’ struggles and the extent to which Afro-Colombians were attempting to use the international and American institutions to pressure the state to enforce the collective rights to land and development that they had been guaranteed under the 1991 Colombian constitution and subsequent legislation in 1993. I began to research the extent to which their claims were similar to and different from those made by indigenous peoples. I ended up making several trips back to Colombia to research the history of the 1993 law as well as some of its contemporary uses by communities making collective land claims. I spent time with one such community in the Caribbean area of the country, which has brought a claim to the Constitutional Court of Colombia. I ended up basing the final chapter of the book on this community’s claim, in part to consider how rights based on identity become so important to social movements or groups that might not otherwise have opportunities for land use or ownership or development. At the same time, I suggest that the framing of cases around cultural identity often displaces or defers issues of economic inequality and even of structural racism.

MM: How long did it take you to complete the book, starting from when you first came up with the idea for it?

KE: Well, it was in 2000 that I first explored the idea in a few pages in the article I mentioned earlier. About two years later I began to work on it in earnest. So I would say eight years. Of course, during this period I was doing a lot of other writing, but mostly not in the area of indigenous rights. So, most of what is in the book has not been previously published, which means I’m very curious to see how it will be received by scholars and advocates working on indigenous rights and on human rights and public international law more generally.

MM: What role did fieldwork play in your book?

KE: I didn’t believe I could write a book about social movements and their strategies without finding a way to get access to the language of the movements themselves. I did that in a variety of ways. For pan-indigenous movements in Latin America in the 1970s, for example, I relied a lot on a beautiful collection of manifestos and statements put together by a well-known Mexican anthropologist, Guillermo Bonfil Batalla, in a book entitled Utopia y revolución. For contemporary movements, I took advantage of some knowledge I had gained while living in Utah for a decade (from 1992–2002) and also engaged in something akin to traditional field work in Colombia as well as in Chiapas, Mexico. There is a fair amount in the book about some controversies I only know about by virtue of having lived in or traveled to these areas. Some of the information on Chiapas and Colombia also comes from documents like pamphlets and reports that I would likely have never found without physically being there. I donated most of those materials to the Benson Collection (along with documents that I found on the internet that I fear might not always be available through the web) so that other researchers can use them as well.

Engle is the Cecil D. Redford Professor in Law at the Law School and founding director of the Bernard and Audre Rapoport Center for Human Rights and Justice. She is also an affiliated faculty member of the University of Texas’s Teresa Lozano Long Institute of Latin American Studies and the Center for Gender and Women’s Studies. She teaches courses and specialized seminars in public international law, international human rights law and employment discrimination.

Engle writes and lectures extensively on international human rights law. She received a Bellagio Residency Fellowship from the Rockefeller Foundation in 2009 to work on a new book on gender and international criminal law.

She was recently profiled in the University of Texas’s Inside Our Campus.