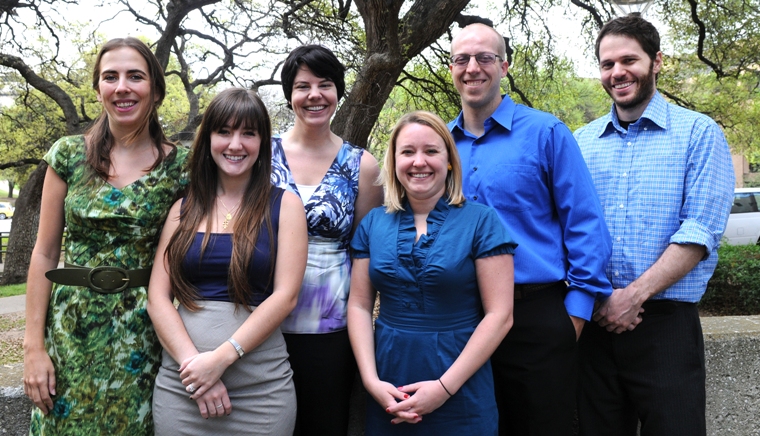 The Whitehursts named the fellowships for lawyers they admire in hopes that the recipients will be inspired by the honorees’ work in the public interest. The Whitehursts have named the summer 2011 fellowships in honor of lawyers Michael S. Greco, Dicky Grigg, Jonathan Ross, Broadus Spivey, and Victoria Touchet, as well as Julie Clark, a non-lawyer who is vice president of strategic alliances for the National Legal Aid and Defender Association.

This year the following second-year students have been selected to receive the $4,250 fellowship:

Meg Clifford will work for Texas Appleseed on the school-to-prison pipeline initiative. Last summer she clerked at Texas RioGrande Legal Aid and the Travis County Juvenile Public Defender’s Office. She is co-president of Youth Court, an alternative disciplinary collaboration between UT Law and Webb Middle School. She also participates in Street Law and the Texas Journal of Civil Liberties and Civil Rights. Prior to law school she taught with Teach for America in New York.

Michael O’Keefe Cowles will work at the Lawyers’ Committee for Civil Rights Under Law in Washington, D.C. Last summer Cowles worked for the ACLU of Texas. During the school year he has clerked at the Texas Civil Rights Project and participated in the Transnational Worker Rights Clinic. He is president of the UT Law’s American Constitution Society student chapter, staff editor of the Texas Journal on Civil Liberties and Civil Rights, and cofounder of the National Lawyers Guild student chapter. He is also a Rapoport Fellow and serves on the Justice Center’s student advisory board as a Public Service Scholar. Prior to law school he taught with Americorps and worked as a Child Advocacy Specialist with CASA of Travis County.

Amelia Ruiz Fischer will work for the Texas Civil Rights Project in its Austin office. Last summer she interned with Gomez y Reinoso, Abogodas, in Sanlucar de Barrameda, Cadiz, Spain. At the Law School she serves as a member of Street Law, the Domestic Violence Survivors’ Support Network, the National Lawyers’ Guild, and the National Immigration Project. She has participated in the Immigration Clinic, coordinating student trips to the T. Don Hutto Detention Center, and the Transnational Worker Rights Clinic. Prior to law school she worked for American Gateways in Austin.

Alissa Parsley will work for the ACLU of Texas in its Austin office. Last summer she clerked at American Gateways, representing low-income clients in immigration proceedings as well as performing pro se rights presentations at the T. Don Hutto Detention Center. At the Law School she serves as staff editor of the Texas International Law Journal, is a member of Law Students for Reproductive Justice, and has participated in the Immigration Clinic. Prior to law school she worked for Planned Parenthood of the Rocky Mountains.

Jordan Pollock will work with the Northwest Immigrant Rights Project in Seattle on its asylum project. Last summer she interned at the ACLU of California in Los Angeles. Pollock, the UT Law class of 2012 Equal Justice Scholar, serves as the student-faculty liaison and symposium coordinator for the Public Interest Law Association, is a member of the National Lawyers Guild and National Immigration Project, and has participated in the Immigration Clinic. Prior to law school she worked with clients on immigration matters as a paralegal at the New York Legal Assistance Group.

Kelsey Snapp will work for Texas RioGrande Legal Aid in its Weslaco office on farm labor and low wage worker cases. Last summer he interned with Appleseed in Austin. At the Law School he has worked with the Community Development Clinic and the Immigration Clinic, and is treasurer of the Domestic Violence Survivor Support Network. He participated in the Pro Bono in January winter break trip, and also volunteers for SafePlace. Prior to law school he worked as a Spanish translator for Health for Friends in Norman, Oklahoma.

“The Law School is very grateful to Bill and Stephanie Whitehurst for creating this summer fellowship program,” said Eden Harrington, director of the Justice Center. “Their generosity makes it possible for these outstanding students to gain valuable experience, work to increase access to justice, and prepare to pursue public interest careers.”