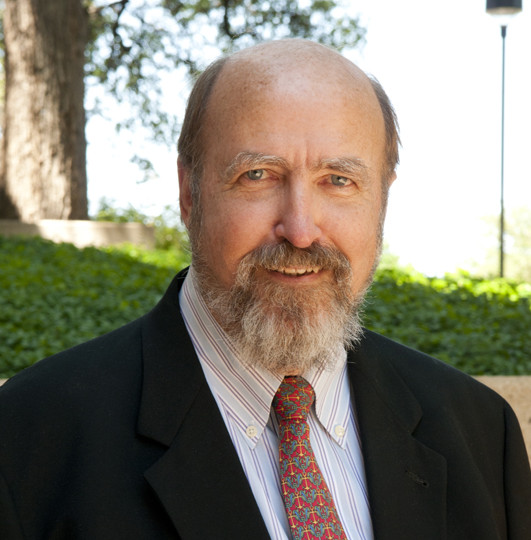 When David G. Hall arrived as an undergraduate at the University of Texas at Austin, he was a typical, conservative-leaning kid from the Gulf Coast. He had grown up in Baytown, east of Houston, with a father in the oil industry and a schoolteacher mom. He gravitated to student organizations like the Young Republicans and the Baptist Student Ministry. He was a Silver Spur—and it was on his watch that a group of Aggies managed to steal Bevo from a farm north of Austin.  Hall went to the Texas Rangers for help and accompanied officers on the mission to rescue the mascot from enemy clutches.

But the 1960s were a turbulent time; only one week after the Bevo escapade, President John F. Kennedy was assassinated, and the nation soon found itself embroiled in deeply divisive issues. “I got mixed up with antiwar activities,” Hall said, “and I joined a group that spent an inordinate amount of time not studying but protesting,” After graduation, he decided to become an attorney to foment social change. “My heroes were the civil rights lawyers of the South, To Kill a Mockingbird—all of that. As hackneyed as those stories were, I think they affected a lot of us.”

A year into law school, however, his enthusiasm waned and he found himself craving real world experience. He dropped out, joined the Peace Corps, and spent the next two years in Venezuela. Once in the field, Hall quickly realized that his experience did not amount to much. “We were supposed to help them develop their country,” he said, “but I didn’t have a whole lot of practical skills to offer.” He worked with various co-ops and found himself working a Cinva-ram, making building materials. “I was not particularly good at making compressed earth blocks,” he laughed, “so then I went back to law school, much more motivated.”

Back in Austin, Hall followed with interest the news from Starr County in the Rio Grande Valley, where migrant workers in the melon fields, inspired by Cesar Chavez and the National Farm Workers Association in California, went on strike for better wages and recognition of their newly formed union. Hall began going to Corpus Christi to talk to James DeAnda, ’50, about his idea of establishing a legal services organization that could represent the workers. “Before I even left law school,” Hall reflected, “I began going down to Corpus Christi to bug him about it.” Hall knew that he wanted to take up the cause of the migrant workers as soon as he graduated. “I figured it was something I’d do for about two years,” he said, laughing.

So the newly licensed young man headed south. DeAnda’s organization would not be organized for some time, but the United Farm Workers wanted a full time lawyer on their staff; they had encountered a lot of problems with the Texas Rangers and local law enforcement taking sides and busting up strikes in the Valley, so they were eager to hire the idealistic young litigator. They approached Hall and said they could pay him $750 for three months’ work. The money never materialized, but Hall went to work anyway and scraped by on his wife’s meager schoolteacher salary. “I was fully ensconced, suing governors and having too much fun to quit,” he said.

DeAnda, working through the Texas Trial Lawyers Association, soon had Texas Rural Legal Aid (TRLA) up and running, and Hall joined their board of directors. They procured federal funding to provide legal services to the poor in nine counties in South Texas. In 1975, Hall became the third executive director of TRLA, a position he still holds.

Over the past thirty-five years, Hall has shepherded TRLA through considerable expansion. When he first started with the organization, TRLA consisted of eight or nine lawyers. Today, they employ 140. By 1978, TRLA provided services in some forty-five counties in Texas. In 2002, TRLA absorbed legal aid programs in San Antonio, Austin, El Paso, and the “Coastal Bend” (Corpus Christi, Laredo, and Victoria) and changed its name to Texas RioGrande Legal Aid. With an additional office in Nashville, Tennessee, to serve migrant farm workers in six southern states, TRLA is the largest legal aid program in Texas and the third largest in the country.

A significant part of Hall’s job is securing adequate funding. Initially, most of TRLA’s operating budget came from the federal Legal Services Corporation (LSC). In the 1980s, the Reagan administration—after first trying to defund LSC altogether—managed to slash the LSC budget by a third. During the 1990s, Congress, after failing to eliminate the LSC, imposed a slew of restriction on grantees, and TRLA found itself unable to bring class-action lawsuits, lobby Congress, represent people in prison, or seek attorney fees in cases where they prevail.

Hall has helped TRLA navigate the shortfalls and restrictions and find sources of funding in Austin. The state government has become a major source of funding for legal aid programs, beginning when the Texas Supreme Court implemented the Interest on Lawyer’s Trust Accounts program, or IOLTA, and mandated that the money go to nonprofits that provide free civil legal services. The IOLTA funds, together with other monies raised by various legislated fees, are administered by the Texas Access to Justice Foundation to organizations like TRLA. As the sources of legal aid funding have shifted over the years, Hall has played a major role in convincing the state government of TRLA’s relevance.

Hall’s case is made somewhat easier by the demonstrable impact TRLA has had in the lives of Texas’s poorest residents. Each year, TRLA lawyers represent over twenty-five thousand people who would not otherwise be able to afford counsel. The majority of TRLA’s clients today are low-income women and children who are victims of domestic violence. Other clients include disabled residents, victims of elder abuse, homeless people, and migrant farm workers. TRLA attorneys specialize in over three-dozen practice areas, including civil rights, environmental justice, disaster assistance, foreclosure, and human trafficking.

In 2009, TRLA lawyers convinced a federal court that the Federal Emergency Management Agency (FEMA) had discriminated against-low income homeowners in the wake of Hurricanes Dolly and Ike. Thousands of residents in the Valley had been denied assistance with little explanation. TRLA’s suit forced a change in FEMA’s policy: the agency now issues standards and criteria by which aid is distributed, allowing for a more open and fair appeals process.

Another landmark case Hall is particularly proud of involved the Fundamentalist Church of Jesus Christ of Latter Day Saints (FLDS). TRLA took on the case of FLDS mothers after their children were taken into custody by Child Protective Services during a raid on their settlement near Eldorado. “We came in at the behest of the administrative district judge to represent the mothers,” Hall recalled. “We went in with fourteen lawyers and realized pretty early on that we had to get the case out of the local jurisdiction, which was so hostile towards the sect.” Ultimately, TRLA lawyers convinced the Texas Supreme Court that the children were not in imminent danger and should be returned to their parents.  Texas Lawyer, citing the organization’s role in winning the children’s release, named TRLA the 2008 “Impact Player of the Year.”

Hall is not without individual accolades for his leadership of TRLA.  Texas Lawyer named him one of the top twenty-five lawyers of the last quarter-century, and the State Bar of Texas Poverty Law Section gave him the first ever Noble Award in Poverty Law, an award established to recognize “a lifetime of public service in promoting poverty law as a noble profession, and significant lifetime professional accomplishments in expanding the provision of high quality legal services to poor people and protecting their legal rights.”

For Hall, what started as a two-year, idealistic plan for post-graduate adventure has become a lifelong career of public service. “I was a product of the ferment of the sixties,” he said, “and I’ve just continued ever since.”—J. Dale Cannedy

Related Link: Video of “Champions of Change: Closing the Justice Gap in America,” a panel discussion with U.S. Attorney General Eric Holder and Department of Justice Senior Counselor for Access to Justice Mark Childress that David Hall took part in on October 13, 2011. (The panel on which Hall spoke begins at minute 47.)