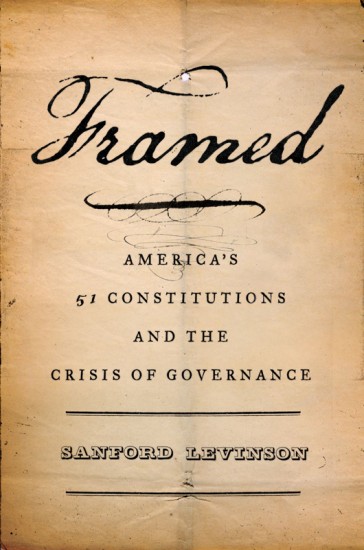 Sanford Levinson, W. St. John Garwood and W. St. John Garwood Jr. Centennial Chair at the Law School and professor of Government at the University of Texas at Austin, has recently written another book about the U.S. Constitution, Framed: America’s 51 Constitutions and the Crisis of Governance (Oxford University Press). Levinson’s assertion in Framed that Americans treat the Constitution with uncritical reverence when in fact the document should be heavily revised is sure to prove controversial and provocative. But as is clear in the following brief interview UT Law conducted with Levinson, a national dialogue about the flaws and strengths of the Constitution has become more and more vital when large numbers of Americans of all political persuasions are convinced that our political system has become mired in a dysfunctional gridlock. In the book, Levinson examines the structure of the U.S. Constitution and compares it to various U.S. state constitutions to look for the most fruitful areas for reform to make America more genuinely democratic and to create a system of government that can more effectively respond to contemporary challenges.

UT Law: What prompted you to write this book now?

Sanford Levinson: Probably the most accurate answer is that I began teaching undergraduate courses at UT-Austin and Harvard College on “the political system constituted by the Constitution,” which meant, among other things, that I found myself preparing quite formal lectures. As time went on, it seemed obvious that the lectures served as the backbone of a new book. But what prompted me to teach the courses was my ever stronger belief that the most important parts of the Constitution were those we in the legal academy almost literally never talked about, the “hard-wired” structural provisions that generate no real debates about “meaning” and “interpretation” (which is why lawyers are uninterested in them), but do, on the other hand, raise profoundly important questions about their wisdom.

In your recent New York Times blog, you described our constitution as “imbecilic,” yet most Americans revere it. What do you think most Americans would actually be surprised to find is in the Constitution?

It’s an unfortunate truth that most Americans “revere” the United States Constitution. That is, in many ways, the central issue of another book of mine, Constitutional Faith, originally published by the Princeton University Press in 1988, but reissued with a new afterword in 2011. I think that most Americans might be surprised by the sheer number of hurdles the Constitution places in the way of those who seek significant change. It is a system designed to generate gridlock. It’s admirers would say, instead, that it’s a system designed to create “consensual” decision-making, but I think it’s fair to say in 2012 that the only “consensus” among most Americans is that the American political system has become dangerously dysfunctional.

What do you see as the main problem with our constitution, and what would be the best way to reform it?

There are many problems, which is one of the reasons the new book goes on for four hundred pages! But if I have to select the biggest problem it’s probably Article V, the Amendment provision, which, practically speaking, makes it next to impossible to amend the Constitution with regard to anything controversial. This has two awful consequences: One is that needed changes, even so banal as changing Inauguration Day to reduce the time between election and the taking of office by a new President, are very difficult to bring about. But in some ways the more serious consequence is that the very difficulty of achieving change in effect discourages even having serious conversations about the need for change. Any suggestions will appear quixotic (or worse). We are therefore encouraged to enter into massive denial about the potential seriousness of our political situation.

What are the prospects for the kinds of reforms you advocate?

The honest answer, given the barriers constructed by Article V, plus the undue reverence for the Constitution itself, is that prospects for reform are very low, unless, of course, we really do go over a political cliff. Unfortunately, it usually takes the occurrence of disasters or the vivid belief that one is on the edge of the abyss in order to bring about significant change.

With the increased power of lobbyists and other “special interest groups” over the past thirty years or so, do you worry at all that if Congress began to push for reforms or amendments to the constitution we could end up with something worse than what we have now.

That’s certainly a realistic worry. Of course, I advocate a brand new constitutional convention, which would mean, among other things, that Congress would be essentially absent from the process—and a good thing, too.

What role can UT Law alumni, students, and professors play in pushing for constitutional reform?

The most important immediate task is simply to take the possibility seriously. At this stage, I welcome any and all conversations with people, regardless of their political preferences, about whether they believe they’re being well served by the existing institutions of American political life. If, like most people today, they are basically alienated from these institutions, then the next question is whether the Constitution itself, because of decisions made in 1787, in a remarkably different time, contributes to the anxiety and pessimism. Law professors, in particular, need to do a far, far better job than we have done about teaching our students the entire Constitution, and not only the part that’s litigated. We may do a fine job of preparing our students to be first-rate constitutional advocates; we do an inadequate job of training them to be truly informed citizens who are able to assess the Constitution in all of its dimensions. I’d be delighted to speak to any and all students or alumni who might be interested in discussing any of these ideas.