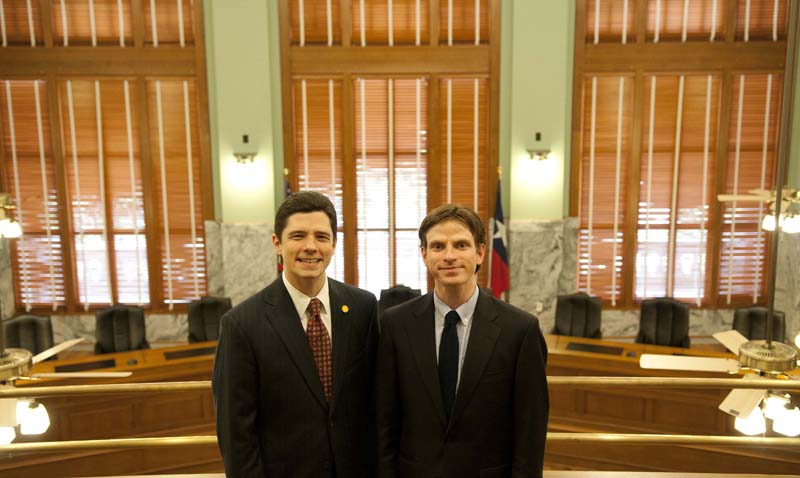 Cooke Kelsey, a second-year student at UT Law, can barely contain his enthusiasm about a summer spent interning for Judge Jennifer Elrod of the United States Court of Appeals for the Fifth Circuit, and Justice Brett Busby of the Texas Fourteenth Court of Appeals. At both courts, he was allowed to participate in researching, writing, and editing opinions with significant real-world consequences. “It’s extremely exciting for a student to be able to have input on large cases,” Kelsey said. “You don’t get that in any other kind of job I’ve ever had. It’s totally unprecedented.”

“The work is very hard, but it’s so much fun that it really doesn’t seem to require much effort,” Kelsey added. “It’s just a blast.”

Kelsey is far from the only Law School student to see his coursework brought to life with a behind-the-scenes internship in a judge’s chambers. Over the past three years, an average of eighty-six students per year have earned academic credit for summer internships in the judiciary. A little over half have interned with federal judges, and the other half with state appellate judges. Professor Mary Crouter, director of the Law School’s Judicial Internship Program, estimates that 80 percent of the summer interns are rising 2Ls.

Many judges have established relationships with the Law School and look here for new interns each summer. “The interns that our court works with have been bright, eager to acquire new skills, and they offer real assistance at a time when we are short-staffed due to budget constraints,” said Justice Jane Bland, ’90, of the Texas First Court of Appeals. “More than that, they give us an insight into what’s around the corner in the legal practice. They’re very facile with computer skills and cutting-edge research techniques.”

“They’re good at softball,” joked Judge Susan G. Braden of the U.S. Court of Federal Claims, who calculates that she’s taken an intern from the Law School each summer for the past ten years. Braden’s husband, Thomas Susman, is a UT Law grad, and her summer softball team, Money Damages, is a case study in professional team-building. Joking aside, Braden is serious about providing opportunities for her interns to build skills and develop professional networks. She invites former clerks and interns several times each week for brown bag lunches, and this past summer she introduced her interns to D.C. luminaries like Supreme Court Justice Stephen Breyer, Senate Minority Leader Mitch McConnell, and former Solicitor General Ted Olson.

The internship faculty and students alike are grateful to judges for taking on UT Law interns, and, Crouter said, the Law School’s requirements for academic credit are consistent with the ways that the judges want to work with interns. The primary requirements are that students be given substantive legal work, significant writing experience, and ongoing supervision.

“They do the same work that our law clerks do, in terms of, on the front end, being the first eyes that look at a case and analyze an issue on appeal,” Bland said. “Then they’re also the fresh eyes we use for editing. They see the process at its inception and also at its conclusion.”

Indeed, Crouter noted, judges welcome their role in the educational process. “No one will read my opinions in history books—I won’t be remembered for what I did in my writing,” Braden said. “I’ll be remembered for who I trained.” UT Law alums who interned with Braden include lawyers in private practice at Gibson Dunn, Baker Botts LLP, and Ropes & Gray LLP, as well a recent clerk for a U.S. Court of Appeals judge. “Everybody’s employed. I have a very good track record,” Braden said.

Busby, a first-year judge who clerked at the U.S. Supreme Court and until recently served as an adjunct professor for the UT Law Supreme Court Clinic, knows well how a summer judicial internship can prepare a law student for professional success. “I was once an intern and a law clerk, and I found it to be an invaluable experience for figuring out how courts really decide cases,” he said. “You’re seeing firsthand what works as an advocate and what doesn’t work.”

Kelsey agreed that his summer internship has enhanced his resume. But, more importantly, it’s made him a better lawyer-to-be. “I was able to put everything from law school into practice and gain real-world legal experience,” he said.—Mike Agresta