A research center working at the crossroads of security and policy solutions, the Robert S. Strauss Center announced it has appointed as its new director UT Law Professor Robert Chesney. A renowned national security law scholar, Chesney previously served as a Strauss Center Distinguished Scholars. He will assume his new role in January 2014, succeeding Dr. Francis Gavin, who has taken a position with the Massachusetts Institute of Technology Security Studies Program. 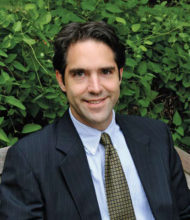 Chesney is passionate about the prospects for the future of the Strauss Center. “The cutting-edge security dilemmas of the 21st century require interdisciplinary solutions,” he said. “For that, the Strauss Center has a special role to play. We integrate the intellectual resources of a premier research university, bringing together an extraordinary array of talented faculty and students, and connect them to experts from government and the private sector.

“The potential benefits are immense, both for UT’s faculty and students and for the public. Under Frank Gavin’s leadership, the Strauss Center already has accomplished so much. I’m honored to take the reins from him, and as excited as I could possibly be about what we will accomplish next.”

“Bobby Chesney is widely recognized as an expert in the law related to terrorism, intelligence, and national security,” said UT Austin President William Powers Jr. “Leading institutions and media frequently turn to him for analysis and commentary. We are proud to have such a prominent and influential scholar lead the Strauss Center for International Security and Law.”

Chesney’s work draws on his experience as an adviser to the President’s Detention Policy Task Force in 2009, as well as years of service to the intelligence community in connection with both the Intelligence Science Board and the Advanced Technology Board. Chesney also currently serves as a non-resident senior fellow of the Brookings Institution, and frequently testifies before Congressional committees.

The Robert S. Strauss Center for International Security and Law is a nonpartisan research center at The University of Texas at Austin dedicated to promoting policy-relevant scholarship on the problems and opportunities created by our increasingly globalized and interconnected world. The Center’s mission is to produce cutting-edge, interdisciplinary scholarship to help solve the world’s most pressing global challenges, while being at the forefront of an effort to bring a greater focus on global affairs to the University of Texas. Programs bring world-renowned scholars, legal experts and policy makers to give public talks on the UT campus, and funding is provided to students to conduct research, intern abroad or otherwise engage in Strauss Center work.