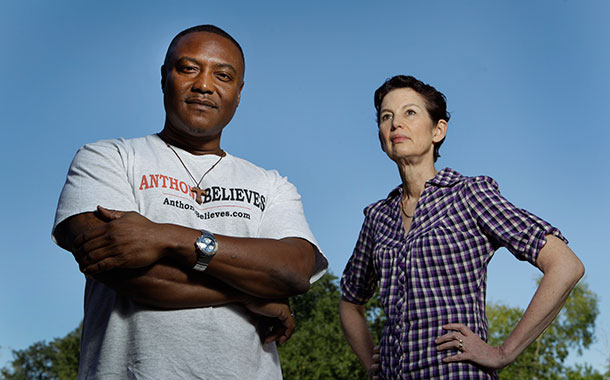 How do you repay someone who saved your life? That’s a question Anthony Graves pondered when he became a free man.

For eight and a half years, alumna Nicole Casarez, ’79, worked without compensation to help exonerate Graves, who spent 18 years in prison — 12 on death row — for heinous murders he did not commit.

In 1994, Graves was convicted of assisting Robert Carter in the 1992 murders of a grandmother and five children in Somerville, Texas. Carter had implicated Graves in the crime, but recanted shortly before he was executed in 2000.

Casarez, a journalism professor at the University of St. Thomas in Houston, had one of her undergraduate journalism classes begin a factual investigation of Graves’ claim of innocence at the suggestion of The Innocence Network. What followed was Casarez’s eight-year fight for justice for Graves that resulted in the overturn of his conviction by the U.S. Court of Appeals for the Fifth Circuit in 2006.

It was then that Graves walked off death row but was held in isolation in the Burleson County Jail for years awaiting retrial.

Veteran Attorney Kelly Siegler was hired as special prosecutor, and soon decided in the course of her own investigation that there was “not one piece of credible evidence” linking Graves to the crime. All murder charges against Graves were dropped and he was released in October 2010 at the age of 45, having spent almost half his life in prison.

As restitution, Graves collected $1.45 million in 2011 for his wrongful incarceration. He wanted to share some of that with Casarez as a sign of his gratitude. “I knew she wasn’t going to accept anything from me monetarily,” Graves said. “This is a woman who didn’t accept one penny or ask for one penny.”

Casarez was a transactional lawyer in Dallas and Houston before she became a journalism professor. She said she never thought she’d do criminal law. While she investigated Graves’ case on nights and weekends, she still worked her full time job and was raising three children with her husband, Rueben, also a UT Law ’79 graduate.

“I never thought of it as a huge sacrifice. I never thought to tell her ‘you’re spending way too much time on this,'” Rueben said. “It was good for our children to see it. In a sense, they were able to see that if you work hard and believe strongly in something, eventually you’ll get a good result.”

Casarez said she was committed to helping Graves until the end — even if the end result was his death.

“Hours and tears have all been repaid many times over with love and satisfaction, praise and acclaim,” she said. Casarez was named “Houston’s Best Lawyer” by the Houston Press and won the Champion of Justice award from the Texas Coalition to Abolish the Death Penalty in 2011, among many other accolades.

To repay his “sister” and “angel,” Graves did the one thing he knew Casarez would not refuse.

In the fall of 2013, Graves established the Nicole B. Casarez Endowed Scholarship with a $25,000 gift to her alma mater, The University of Texas School of Law. Graves and Casarez’s husband, Rueben, went to great lengths to keep the scholarship a secret from her at first.

After some scheming, the two men threw what Casarez thought was a going away dinner party for Graves (he had planned to move to New York), but it was really a surprise party for her. Graves had her stand up in front of their friends and families, thanked her and presented her with a framed certificate blazoned with news of a scholarship in her name.

“I was absolutely stunned and honored,” Casarez said. “He couldn’t have picked anything better.”

“It was a Kodak moment,” Graves said, chuckling as he told the story. “Her mouth was wide open.”

Texas Monthly writer and executive editor Pamela Colloff, who was nominated for a National Magazine Award for her two-part series about Graves, “Innocence Lost” and “Innocence Found,” drove from Austin to Houston to attend the dinner party.

“It was a warm, joyous night,” Colloff said. “There’s a lot of love between Anthony and Nicole. Just to see Anthony living his life and looking happy and being well. It’s so moving to see him the way he is. To have him give this gift to Nicole that he didn’t have to do. He wanted to do something that was in the spirit of who she is, as a fighter for justice, as someone who supports young people and selflessly gives of herself.”

Graves is now a motivational speaker, community advocate, producer, and he recently started a nonprofit called the Anthony Graves Foundation, which will work to keep children out of the school-to-prison pipeline.

Casarez continues to teach investigative journalism classes, and has a box of jail mail in her office; every once in a while she’ll reach into the box, read one and determine if she can help. She and her husband play Fantasy SCOTUS (it’s like a fantasy sports league but players predict how U.S. Supreme Court cases will be decided) and are currently the No. 1 ranked team in the country.

“[The scholarship is] meaningful to me because it’s my alma mater. I feel like it’s very fitting. I couldn’t have done what I did without my education from UT law school,” Casarez said. “You always think of people with endowed scholarships as the partners at the big law firms … I’m just a professor at a small school dabbling in representing a death row inmate. It sounds silly when I say that. It’s not what I ever pictured. It’s just a thrill.”

With Graves’ gift to the law school, future law students will benefit from Casarez’s goodwill.

“It’s the least I could do for a woman who went above and beyond the call of duty to save my life,” Graves said. “I want people to know who Nicole Casarez is and what she stands for.”

For more information about giving to UT Law’s scholarship endowments, contact Linda Lewis in the Office of Development and Alumni Relations at 512-232-1112 or llewis@law.utexas.edu.