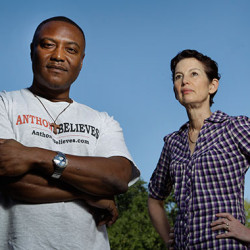 How do you repay someone who saved your life? That’s a question Anthony Graves pondered when he became a free man. For eight and a half years, alumna Nicole Casarez, ’79, worked without compensation to help exonerate Graves, who spent 18 years in prison — 12 on death row — for heinous murders he did […]

Sister Helen Prejean to speak about the death penalty in the United States, October 11, 2012

Sister Helen Prejean, a member of the Congregation of Joseph and author of the book, Dead Man Walking: An Eyewitness Account of the Death Penalty in the United States, will discuss the death penalty on October 11, 2012, at 2:00 p.m. in the Law School’s Eidman Courtroom. The event is free and open to the public.