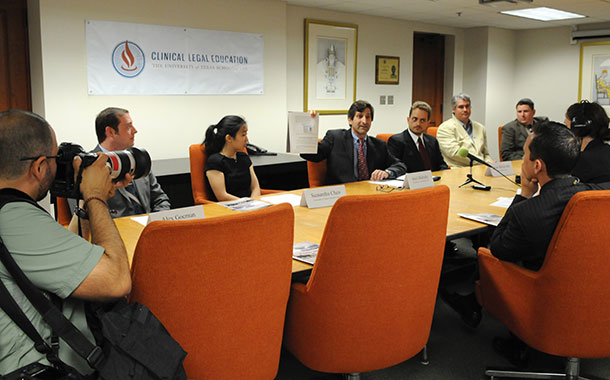 In April, the Texas Law Human Rights Clinic published a report on the threat heat causes to Texas inmates. Following is a summary of the findings in the report written by Ariel Dulitzky, Alex Goeman and Samantha Chen.

Texans know that summers in the Lone Star State are a brutal combination of searing heat and suffocating humidity levels. While we may be proud of our ability to withstand such extreme conditions, that cold blast of air conditioning when we walk indoors is a welcome respite from the heat outside. In fact, prolonged exposure to temperatures as low as 90 degrees Fahrenheit, when combined with high humidity levels, can put even the healthiest individuals in extreme danger. Despite knowing of these dangers, the Texas Department of Criminal Justice (TDCJ) has declined to provide air conditioners in most inmate housing areas, or even to set maximum temperature standards in these areas. This needs to change.

Every summer, the TDCJ subjects its prisoners to deadly temperature and humidity levels, and violates prisoners’ human and constitutional rights and their rights to health, life and dignity. Some note that many law abiding Texans do not have air conditioning in their homes. However, these individuals have the freedom and capability to escape deadly summer heat by entering air-conditioned buildings such as libraries or movie theaters. They can take showers and drink water as many times as they want. TDCJ inmates, on the other hand, spend much of their time locked in enclosed concrete and metal structures, where temperatures often exceed 100 degrees during the summer months.

As we noted in our report “Deadly Heat in Texas Prisons,” [PDF] at least 14 heat-related deaths have been documented at TDCJ facilities since 2007. Many of these inmates had pre-existing health conditions or were taking medications that rendered them heat-sensitive, yet the TDCJ did not properly provide cooled living areas. While the TDCJ uses ventilation and fans indoors, these measures do not protect against heat illnesses in high temperatures and humidity. To the contrary, fans can accelerate heat-related illnesses in such conditions.

The TDCJ’s failure to address the extreme heat conditions in its prisons is a violation of the law, both from a constitutional and international perspective. The Eighth Amendment of the U.S. Constitution forbids cruel and unusual punishment, and courts have repeatedly held that failure to mitigate the extreme summer temperatures that occur in the South is a violation of the Constitution. Additionally, all the major human rights bodies affirm the rights of prisoners to have their dignity respected and to be free from cruel, inhuman, or degrading treatment such as exposure of prisoners to temperature extremes, and many international human rights court decisions have found that extreme heat similar to situations in Texas contributes to a finding of inhuman or degrading prison conditions.

The TDCJ’s practices to combat extreme heat in its prisons are also woefully inadequate, especially compared with the practices of many other states. For example, the Arkansas Department of Corrections has provided air conditioning for its inmates since the 1970s and has set a formal maximum allowable temperature of 78 degrees for its inmate housing areas. The Oklahoma Department of Corrections requires that temperatures in that state be maintained at appropriate levels. Texas’ own Texas Commission on Jail Standards requires Texas county and privately operated municipal jails to keep temperatures in inmate housing areas below 85 degrees. Even detainees at Guantanamo Bay are provided with air-conditioned cells.

It is important to remember that, despite their incarceration, inmates retain an inviolable set of rights: the rights to dignity, health, life, and freedom from cruel, unusual, inhuman or degrading treatment. The heat in Texas prisons continues to violate all of these rights, and there is no excuse for this blatant disregard for fundamental human rights. The TDCJ should take immediate action to better protect its more than 150,000 prisoners from extreme and deadly heat. Otherwise, we will almost certainly see even more preventable, heat-related deaths in the summer of 2014.