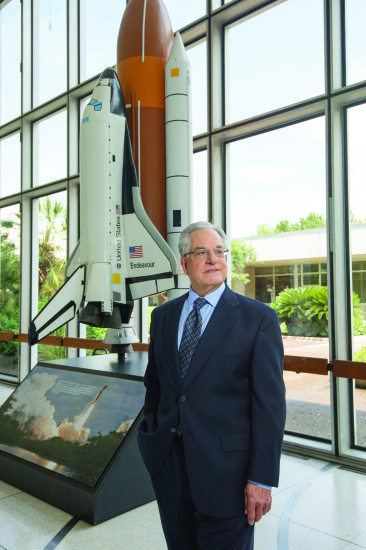 At first glance, Ed Fein’s clients don’t seem to have much in common: a legendary cardiac surgeon, a spacewalking astronaut and a billionaire hotelier.

However, each of these clients have patented technology that emerged from the space program, with Fein, ’65, guiding them through the process as a NASA patent attorney.

To create space-program marvels like Apollo, Skylab, the space shuttle and the space station, NASA engineers have had to invent countless new technologies from scratch. Many find their way into our daily lives, from hospital operating rooms to biology labs to power plants. For nearly a half-century, Fein has been a part of the spinoff process, protecting and licensing the ideas that were born as NASA engineers worked on Apollo and saw the International Space Station to commercialization. Most recently, he helped patent a technology invented at Johnson Space Center that is expected to make highway barriers safer.

“It was a thrill, working with those guys and the astronauts,” Fein said. “It’s just been a great ride.”

At 75, Fein has served longer than any other attorney in NASA’s history, and he’s still going strong.

“Ed [has] prosecuted patents for generations of NASA’s smartest inventors,” said Michael Pratt, ’03, an attorney with the Office of Chief Counsel at NASA’s Johnson Space Center. “He is widely considered the dean of federal patent law for America’s space program.”

Fein, who is also a past president of the Texas State Bar IP Law Section, helped put Pratt at ease when he joined NASA in 2008.

“If there’s a question about IP, he’s the one they’re going to ask,” Pratt said. “He knows the quirks of how it works in the federal contracting system. You get the unique benefit of his deep knowledge, and he’s friendly and gregarious on top of it.”

A San Antonio native and doctor’s son, Fein said he was a “space junkie” and “geeky kid,” in love with math and engineering, and fascinated by space exploration. It was 1957 when the USSR launched Sputnik, the world’s first artificial satellite. Fein was a senior in high school. He followed that and the subsequent Mercury spaceflight programs in the early 1960s with keen interest.

“As a young man, imagine getting to see something like that!” he recalled.

Fein headed to UT for a degree in mechanical engineering and graduated in 1962. From there, he pursued law school, during which he married Sandy Lusky, a UT education student, ’64, and native Houstonian.

Fein graduated from Texas Law in 1965 planning on practicing patent law. He hadn’t left his interest in engineering behind and was eager to watch new technologies being born.

One day Fein attended a lecture by a NASA patent attorney.

“Immediately after he was finished, I ran to him and told him, ‘If anything ever opens up in NASA, please let me know,'” Fein recalled.

It did. In 1967, 18 months into his D.C. sojourn, Fein and his wife headed to Houston for what he called his “dream job” at the Manned Spacecraft Center, which had opened only four years earlier and hadn’t yet launched a moon mission.

Fein began by patenting design elements from early Mercury spacecraft and shuttles. He went on to shepherd many more advances through the patent and licensure process — including advances in satellite technology, computers, sensors and miniaturization — all while holding a historic front row seat on the space program.

“They were a bunch of kids that ran that program,” Fein said. “And we did it with less computing power than you and I have in our cell phones right now.”

There were dreadful times. Fein arrived in Houston shortly after the deadly Apollo 1 launch-pad fire, which asphyxiated three astronauts. He mourned along with his colleagues, too, after the Challenger and Columbia space shuttle disasters.

“It’s horrible to lose people you work with and you know,” Fein said.

Still, the work has been tremendously rewarding. In 1984, NASA engineer David Saucier needed a heart transplant. He started talking with his surgeon Dr. Michael DeBakey, and learned that DeBakey wanted to develop an artificial heart.

Working with the surgeon and NASA engineers, Fein patented and licensed the pioneering left ventricular assist device (VAD) in 1996. “We took some of the pumping technology that we use to load the fuel into rockets and miniaturized it,” Fein said.

Two years later, the first patient received a MicroMed DeBakey VAD, and the device has since transformed the lives of many more patients. It won NASA’s Commercial Invention of the Year award in 2002. Fein accompanied DeBakey to the awards ceremony in Washington, D.C.

In the late 1990s, Fein also oversaw the patent process for inflatable spacecraft, during which he worked with a billionaire hotel entrepreneur who was interested in space. The entrepreneur’s company, Bigelow Aerospace, is now building an inflatable module that NASA will use to connect to the international space station, as well as planning and marketing a commercial space station of its own.

Along the way, Fein has befriended astronauts, including physician-astronauts Scott Parazynski and David Wolf, each of whom have spent more than 40 hours performing spacewalks. Wolf, who is also an electrical engineer, co-designed a device intended to keep living cells in suspension during lab experiments. Fein helped patent and license the technology, called a rotary wall bioreactor, in 1990.

Ted Ro, a NASA intellectual property attorney, hinted that his friend is as revered as practically anyone at NASA. Ro considers Fein a walking encyclopedia of international property law and NASA policy, as well as a shining example of humility.

“The great leaders are that way,” Ro said.

Fein admits there aren’t many people at NASA nowadays who were working for the agency in the moon-shot era, as he was. In 1972, he and his wife watched from lawn chairs in a nearby field as Apollo 17 growled skyward in Florida, carrying astronauts to the United States’ final moon landing. Their two sons Rick and Cory, who were ages four and six at the time (both UT graduates and Cory graduated from Texas Law in ’91), stayed home sick.

“You’ve got your friends going up, and it’s kind of exciting to actually be there and watch them launch,” he recalled. “That’s a real kick to look back and think that I was friendly with people who ended up walking on the moon.”