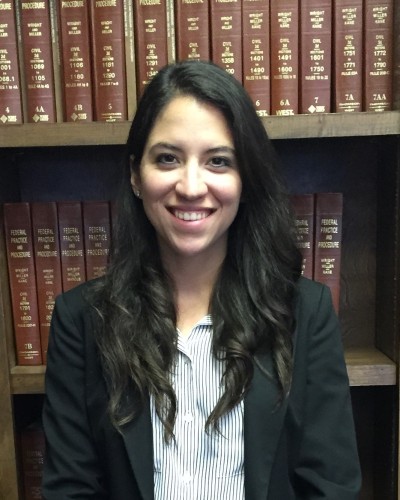 A number of Texas Law students and alumni are off to a number of remarkable fellowships in 2015, including two of the nation’s most prestigious placements for new lawyers: the Fried Frank-MALDEF Fellowship, and the Gideon’s Promise Fellowship. Those highly coveted opportunities went to Alejandra Avila ’14, and Paul McDaniel ’15, respectively.

These fellowships were made possible not only by the applicants’ exceptional scholarship and public service, but also by the efforts of Nicole Simmons, in the Career Services Office, and Eden Harrington and Mary Crouter, of the William Wayne Justice Center.

Ms. Avila, the first Texas Law graduate to ever receive the Fried Frank-MALDEF Fellowship, will spend two years with Fried Frank in New York City as a litigator, then two additional years as a MALDEF staff attorney in Los Angeles.

Mr. McDaniel is heading to Birmingham, Alabama, to work as a public defender in the Jefferson County Community Law Office for the next three years.

In addition to those high-profile placements, Andrea Meza and Tovah Pentelovich, both members of the class of 2015, have received two-year fellowships from Equal Justice Works, in Washington, D.C. Ms. Meza’s placement with be in San Antonio, where she will work with the Refugee and Immigrant Center for Education and Legal Services; Ms. Pentelovich will be staying in Austin, working at Texas Rio Grande Legal Aid on behalf of at-risk students in the public education system.

Finally, Graham Robertson, a rising 3L, was awarded the Peggy Browning Fellowship. Mr. Robertson is spending the summer of 2015  working at the International Labor Rights Forum in Washington, DC.

Read about Paul McDaniel and the Gideon’s Promise Fellowship here.