A celebration of life will be held Friday, September 7 at 2:00 p.m. at Westlake Presbyterian Church in Austin, Texas. A private burial will take place in the Texas State Cemetery. In lieu of flowers, memorial donations can be made to a charity of your choice.

One of the most highly esteemed judges in Texas history, Judge Jack Onion ’50 has died at the age of 93. The following obituary will appear in the Austin American Statesman and the San Antonio Express. It is reprinted below with permission. 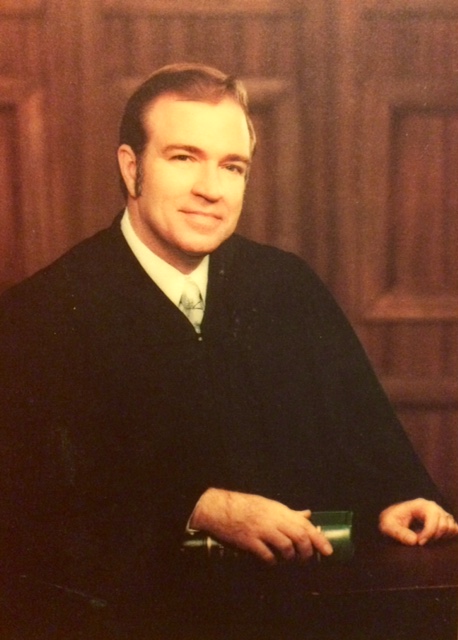 Judge John F. “Jack” Onion, Jr. of Austin passed away peacefully at 93 years of age on September 2, 2018 surrounded by his family. Jack is preceded in death by his parents Harriet and John F. Onion of San Antonio and his twin brother, James “Jim” Onion. He is survived by his wife of 60 years, Nancy Vogelsang, his children: John F. Onion, III of San Antonio and his wife Christi, David Onion of Austin and his wife, Susan and his daughter, Carol Onion Tinney of Austin and her husband Jay. Six grandchildren include: Kate Onion, Frances Onion, John Onion, Scott Onion, Paige Tinney and Case Tinney.

Jack was born in San Antonio in 1925 and knew that he was going to be a lawyer, even as a child. His grandfather, John Frank Onion, was a state representative and general counsel for a Southland Life Insurance Company. His father, John F. “Pete” Onion was a justice of the peace and prominent district judge in San Antonio, and his twin brother, James Onion, would later serve with distinction as a district judge.

Jack grew up in Leon Valley and after graduation from Thomas Jefferson High School, served with his twin brother, James, in the United States Marines, taking part in the invasion of Okinawa and the occupation of Japan for 10 months after World War II ended. Returning home to studies at Trinity University and the University of Texas, Jack graduated from the University of Texas Law School in 1950 and was president of his senior class. While at the University of Texas Law School, he wrote a paper on the unauthorized practice of law, a paper that the State Bar of Texas published and sent out to every attorney in the state. Upon graduation, he joined the Bexar County District Attorney’s office and was soon appointed chief of the civil division, a position he held for four years.

In 1954, Jack made his entry into politics as he was elected justice of the peace at the age of 29. As a justice of the peace, he brought to Texas its very first medical examiner’s office. Two years later, he was elected Judge of the Bexar County Criminal District Court Number 2 (later the 175th District Court) becoming at age 31 the youngest elected district judge in Texas then serving and was re-elected in 1960 and 1964 without opposition. As a district judge, he wrote numerous legal articles and conducted seminars across the state to upgrade the work of the trial judges, earning state wide recognition for his legal scholarship.

In 1958, Jack married the beautiful Nancy Lee Vogelsang, who became his devoted partner in both political life and family life.

In 1966, Jack defeated a sitting judge and was elected to the Court of Criminal Appeals. In 1970, following a constitutional amendment that made the office of presiding judge on the high court a position elected by the voters of Texas, Jack became Texas’ first elected presiding judge. In his twenty-two years at the Texas Court of Criminal Appeals, he transformed the court from an antiquated system to a modern, efficient court. He personally authored over 5,000 opinions, shaping much of today’s Texas criminal jurisprudence.

After retiring from the Court of Criminal Appeals at the age of 63, he spent another 22 years as a visiting judge, writing opinions on the courts of appeals across Texas and serving as the trial judge in some of Texas’ most controversial cases. At the age of 85, as macular degeneration slowed his ability to read case law, Jack ended his judicial career.

Following Jack’s retirement from the Court of Criminal Appeals in 1989, Jack had time to travel with Nancy on many trips to Europe. There as Jack would wryly say, he could bore his traveling companions with his extensive knowledge of European history. One of his favorite memories was teaching a St. Mary’s Law School course in professional responsibilities and ethics in the summer of 1989 at the University of Innsbruck in Austria. His last class ended at 9:30 on Thursday mornings each week and Jack and Nancy would then hurry to the train station, touring in Verona, Milano, Lake Como, Interlochen, and across Germany, Switzerland, Italy, and Austria, returning to Innsbruck late on Sunday night. Jack noted that the students also gave him the highest rating of all the professors at the university.

Even at the age of 93, Jack possessed a photographic memory that could accurately recall names, dates, conversations, cases and trials from decades earlier. In his over half a century as a judge, he stored away tales of Texas’ most egregious criminal cases and its foremost prosecutors and criminal defense attorneys, along with colorful governors, judges and politicians. He loved the law and he worked tirelessly to serve justice and to improve the criminal justice system.

Jack Onion has always had a strong work ethic that pushed him in papers and opinions to not just give an answer but to give the “right” answer. His favorite mantra was, “I’ve always understood that I was here to do something important, not that I was important and had something to do.” He often spoke with gratitude about “the good angels” who were with him throughout the many events of his long and fruitful life. His family gives thanks for the life of John Frank “Jack” Onion as we return him to the care of those good angels.

The family would like to thank the Reverend Chris Harrison for his support and friendship, Dr. H. Kent Beasley and Dr. Kenneth Kroll for their exceptional medical care and the staff of Querencia at Barton Creek.