Texas Law didn’t just give these couples a world-class legal education—it gave them their families! Happy Valentine’s Day from Texas Law and from these lawyers in love! 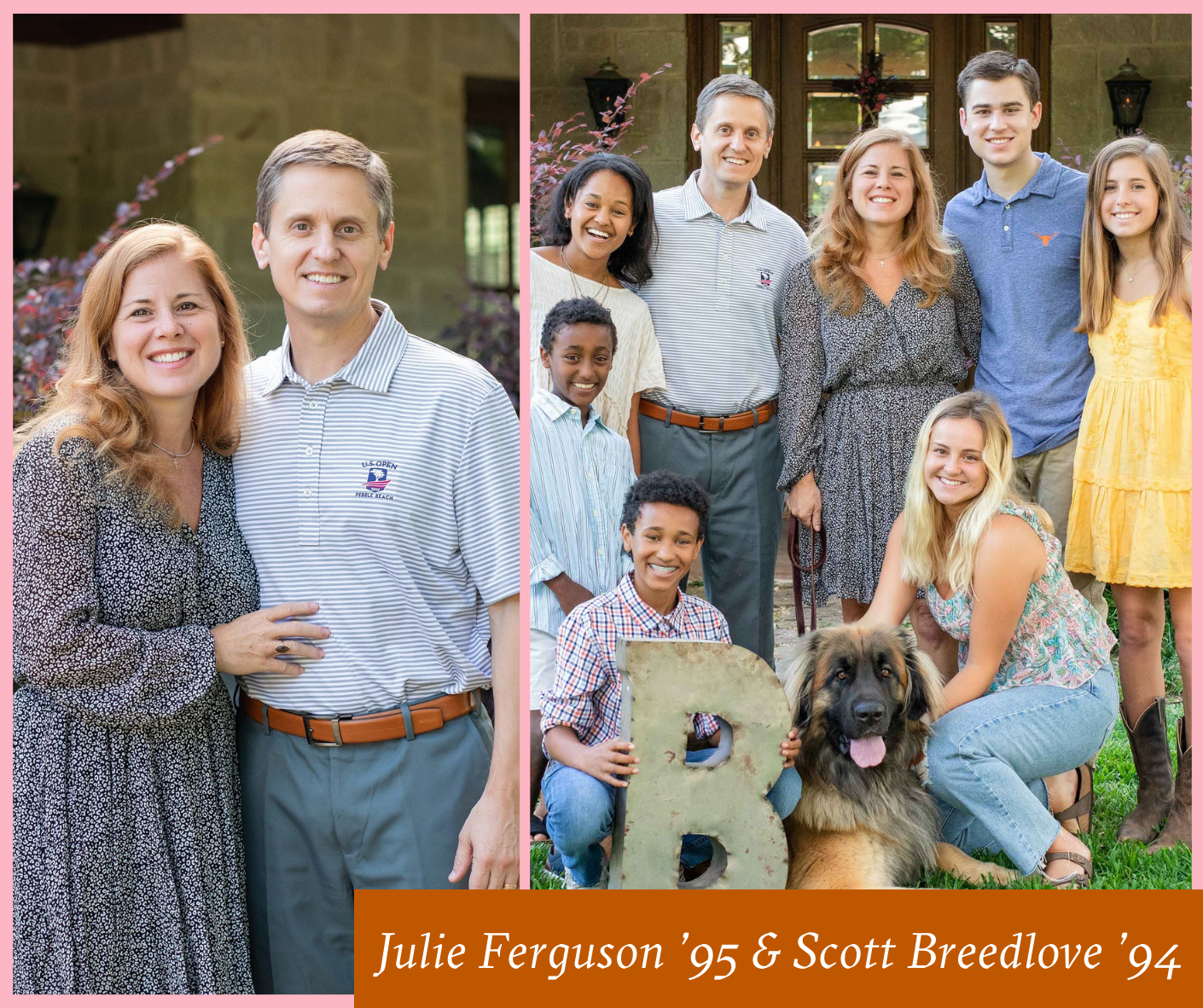 SB: Julie Ferguson ’95 and I overlapped at UT for six years but did’t meet until her fourth and my final semester of law school, when we were in a religious liberties writing seminar together. We were a match almost immediately (at least, immediately after she got out of the hospital following her spleen rupture) and were married just 18 months later, after I returned to Texas following my clerkship in Virginia. Six kids and a couple of gray-ish hairs later, we’re still going strong, ’til death do us part! Which proves that going to UT Law to find “a wife of noble character” (Prov. 31:10) does satisfy the rational-basis test! :-) Three of our kids are now at UT . . . and talking law school. Just writing that makes me feel old. 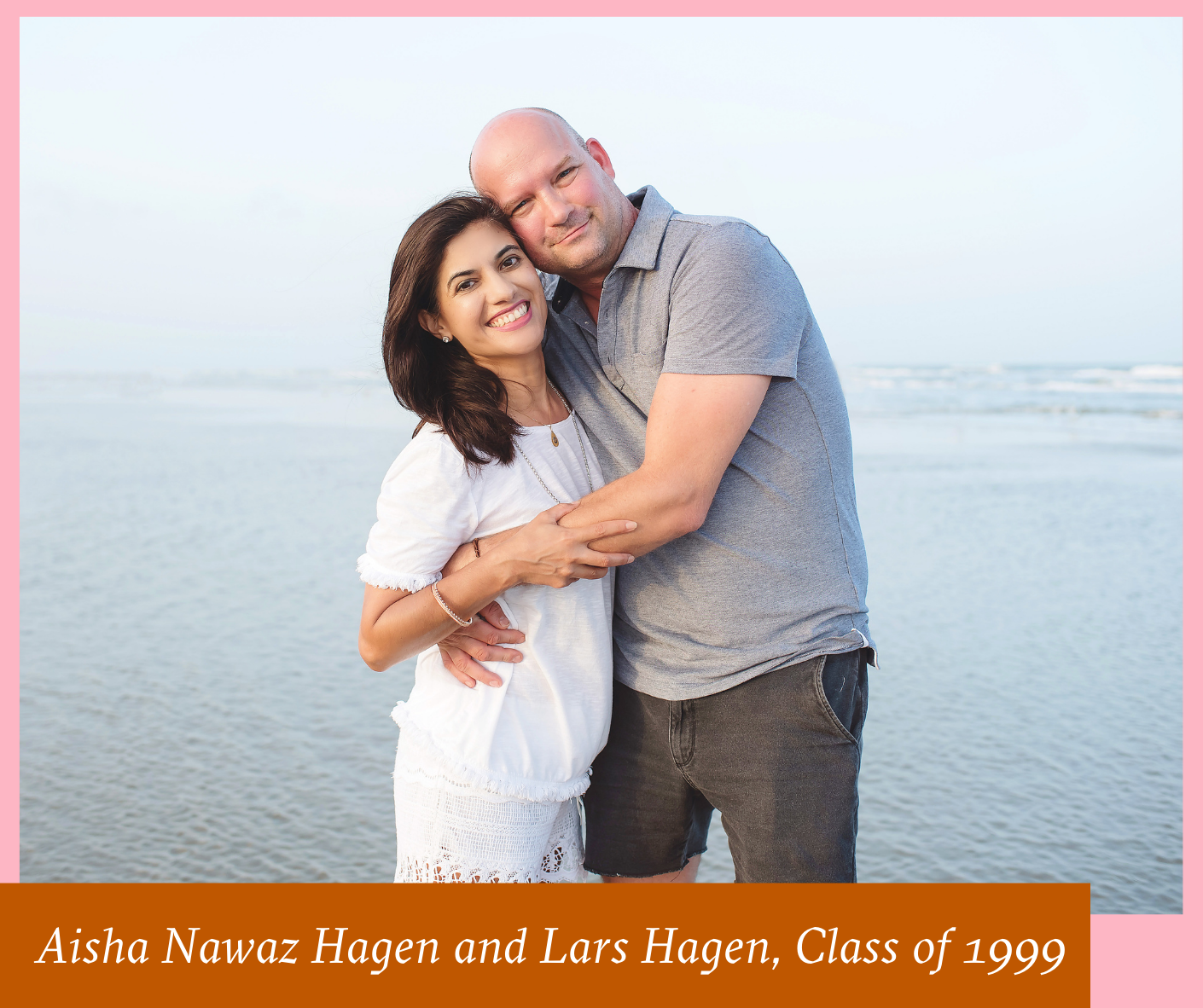 ANH: I met Lars Hagen in the Career Services Office our 1L year. He was in my section too. He made a hilarious comment in response to a question in Patty Hansen’s CivPro class. The answer was: “Maybe the couple did not have cable.” But I can’t recall the question! I remember Lars being as cool as a cucumber. We had a final and it was open book, and he was walking back to his apartment to grab his notes probably 30 minutes before the final was to begin.

We went to a SXSW show in the Spring of 1997, somewhere on Red River, and 17 years of marriage (and two kids and a dog) later—we’re still together and live in Austin where both of us practice law. 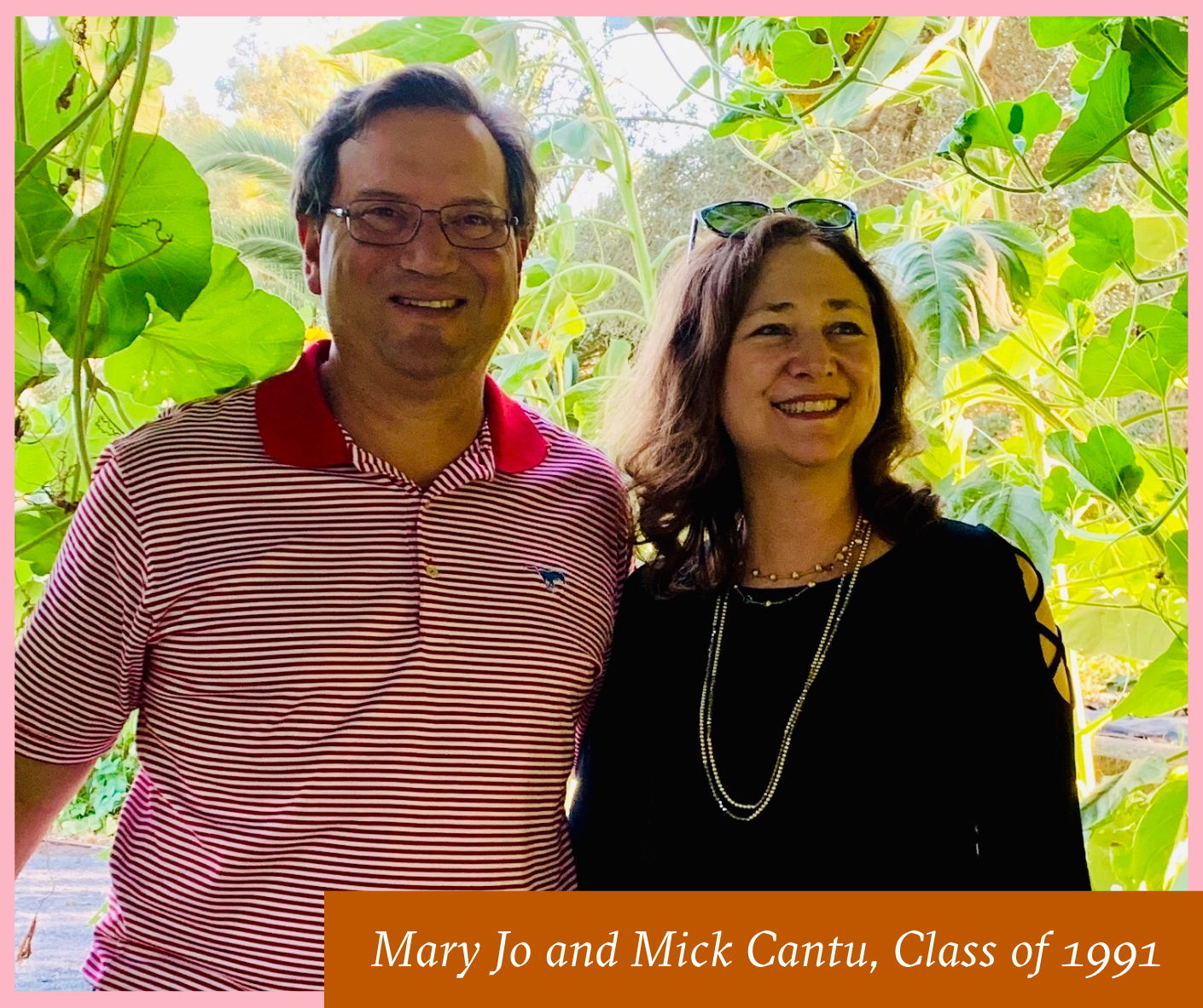 Mick and Mary Jo were both in Section 3 of the class of ’91. Mick was well-known in the class as the first person called on by “Bullet Bob” Hamilton in Contracts. “Mr. Cantu, what is the meaning of assumpsit?” Mick was introduced to Mary Jo by her best friend and his alphabetical neighbor, Catherine Callaway.

They went on a few dates first semester, starting when he offered her a ride to Wurstfest, and dated throughout law school. They began their practices in different cities, but soon became engaged and were married in Houston in July of 1993. They have been married 27 years and have three children, Joseph (24) Alicia (22) and Anna (19). Joseph is UT Law class of 2022, and was also in Section 3. 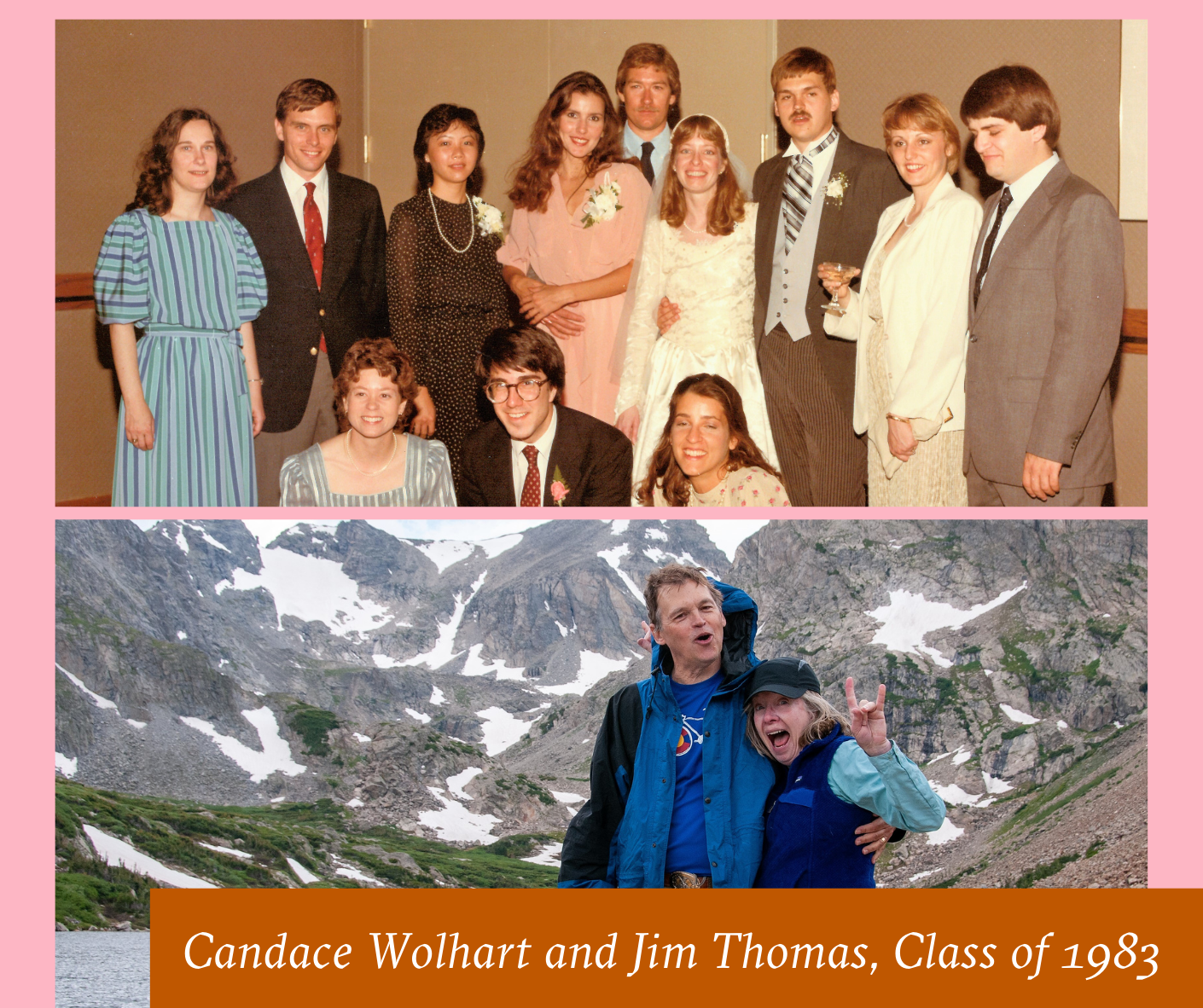 JT: Candace Wolhart and I were in the same First Year section, but our romance started with a night of two-stepping fall of Second Year. Married a week after graduation, with plenty of First Year friends in attendance, we moved to Colorado where we have been loving life and each other ever since. 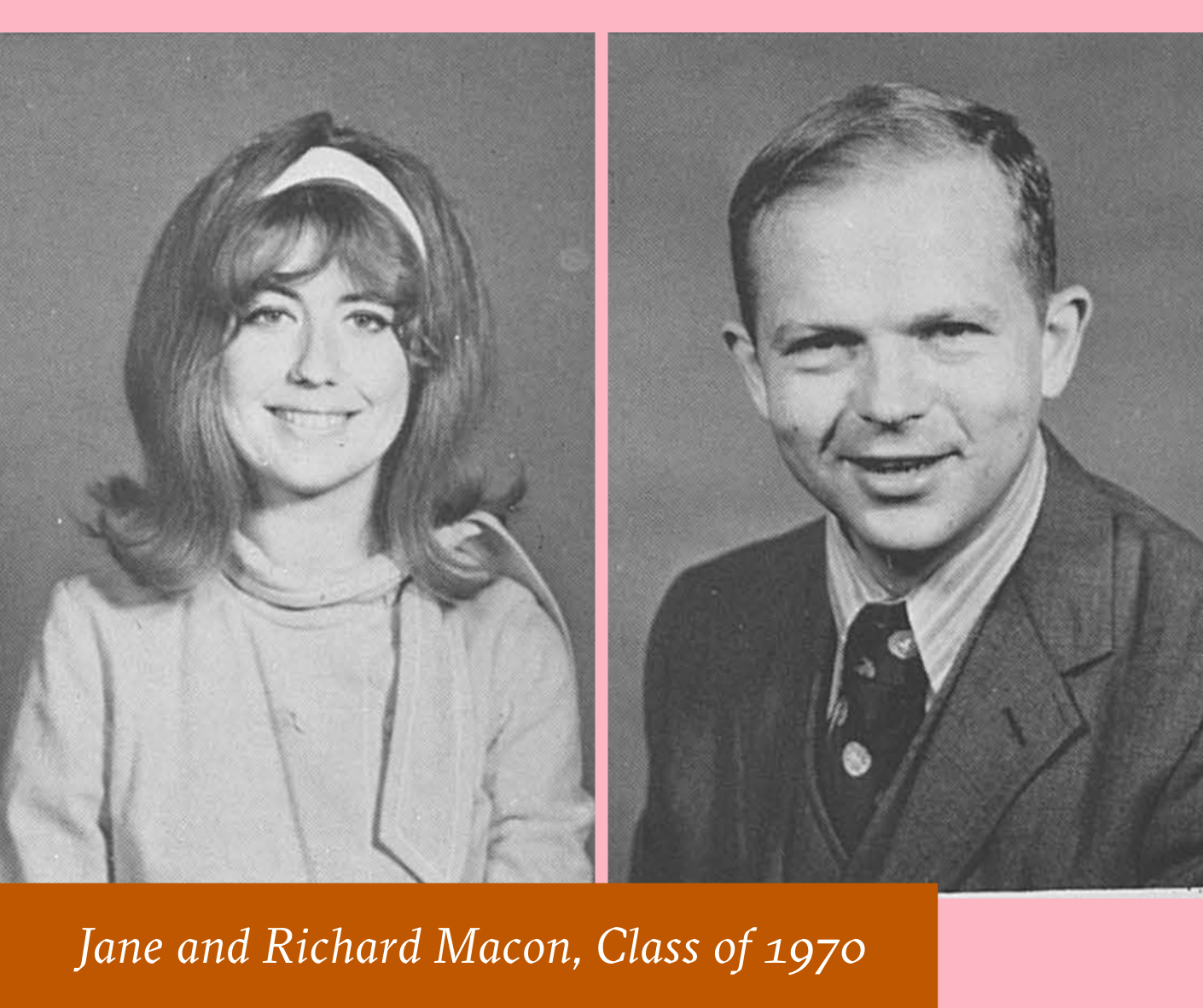 RM: On the first day of Law School in June of 1967, I approached one of the six female students in the Summer Class, a pretty brunette named Jane Haun. I asked her if I could borrow her notes rather than me going to class. She agreed, and before we knew it, we were married in September 1969. We have changed cities and law firms, but after 51 very happy years, she still is the best thing that ever happened to me.

(By the way, her notes sucked!) 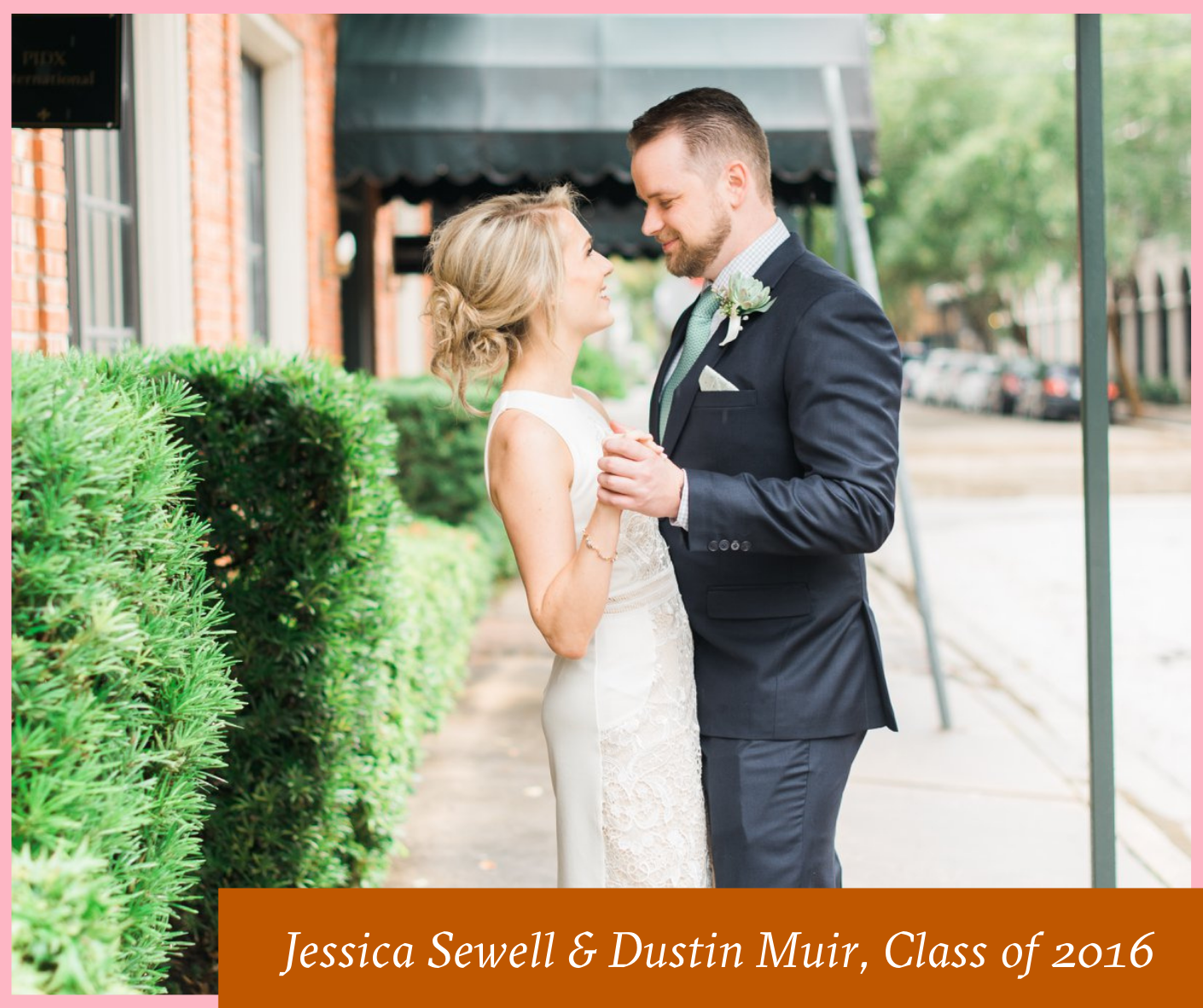 JS: Dustin and I were Section 4 classmates and friends – in the same study groups, going out together, even dressing up in some amazing group costume efforts for law school events like Ex Parte and Law Prom (the cast of Archer; American Hustle; etc.). On Easter weekend in 2015, one of our friends thought it would be a great idea for us to team up and locate beers on a “Beer-ster egg hunt” throughout their house and yard. As you may imagine, some beer was consumed in this process, and we shared our first kiss. We’ll always remember that day as the spark that started our relationship.

Fast forward two years, I was finishing up my first year of work in Houston and found out my firm would be sending me on a one-year secondment to Hong Kong! I called my boyfriend, Dustin, to share the news. Not willing to spend so much time away from me, Dustin proposed, and we were married and off to Hong Kong within six weeks. We are now back in Houston and will celebrate our fourth anniversary this year! 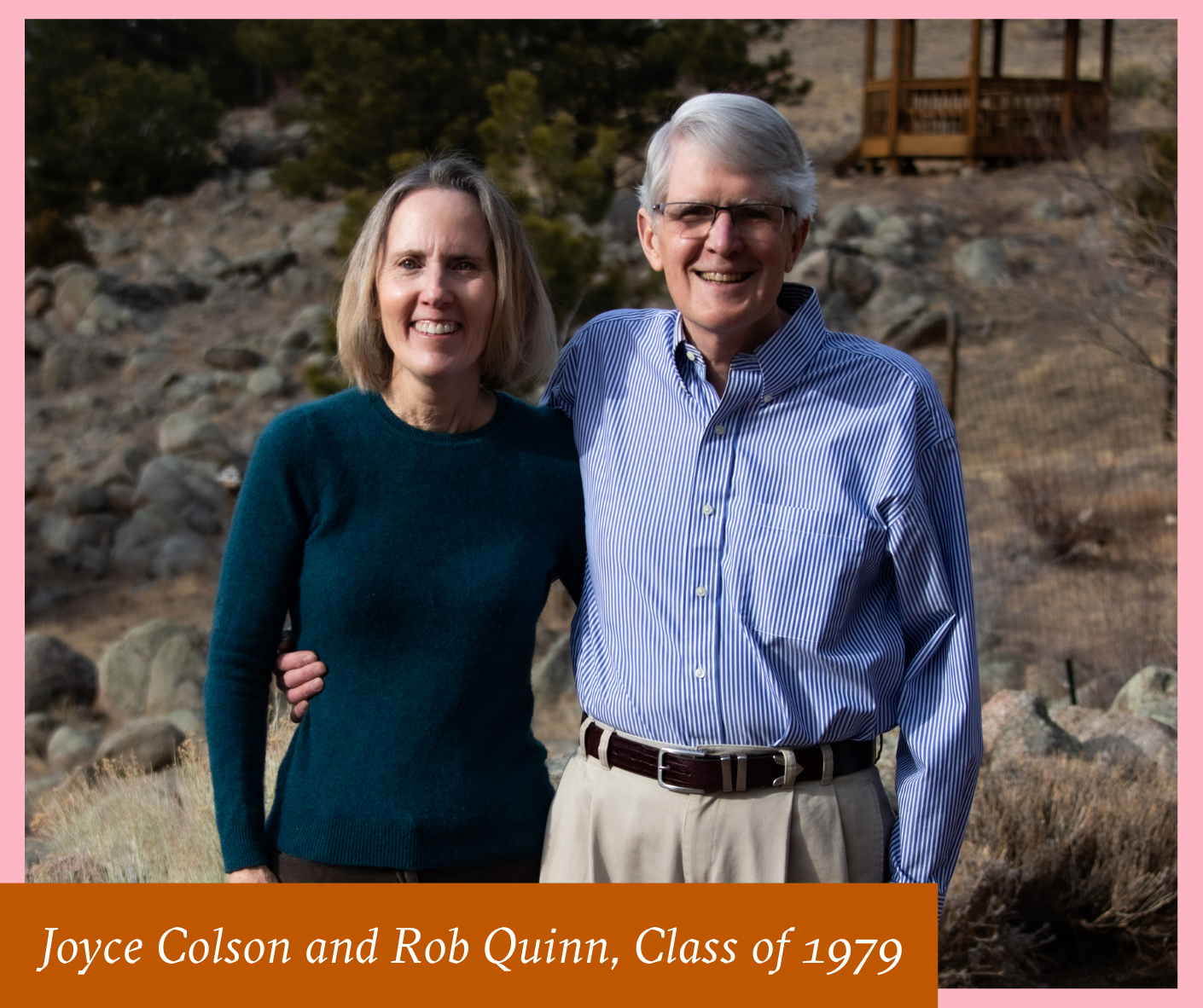 JC: “I’m not getting married –my career is too important.” Having overheard me say this while standing in the registration line for the entering 1976 class, my now husband Rob Quinn went back to his house. He told his fellow U VA alum roommate that he didn’t know (a) about law school and (b) particularly about the women in law school (meaning me).

As luck would have it, we landed in the same teaching quizmaster section. Over the first year, I lived in the law library where I saw Rob infrequently. Rob had a long distance girlfriend from his UVA days, so I slowly became just a friend.

During our second year of law school, a classmate’s apartment complex was being torn down, so he had the party to end all parties. I showed up figuring I’d survived first year, so I could skip a night at the library. Rob was there, we started dancing, and that was it. Our first date was the UT-VA game and my first UT game. Despite UVA’s lopsided loss, we continued to see each other. By third year, our relationship was like that favorite pair of slippers—it just felt right. We got married a week after graduation and a week before the bar review course started.

We moved to Houston, starting out as trial lawyers at different firms, and we were off to the races. Rob came home one day in ’94 and announced his fellow partners wanted to re-up on the office lease for 10 years. By that time, our families had left Houston, and we were ready for a new adventure. Having scouted out Colorado and New Mexico, we moved to Boulder, CO in 1995 . We formed Colson-Quinn and practiced corporate and tech law for 24 years, retiring in 2019. It was my greatest accomplishment at UT Law School—finding my soul mate, best friend, fellow adventurer, and partner. 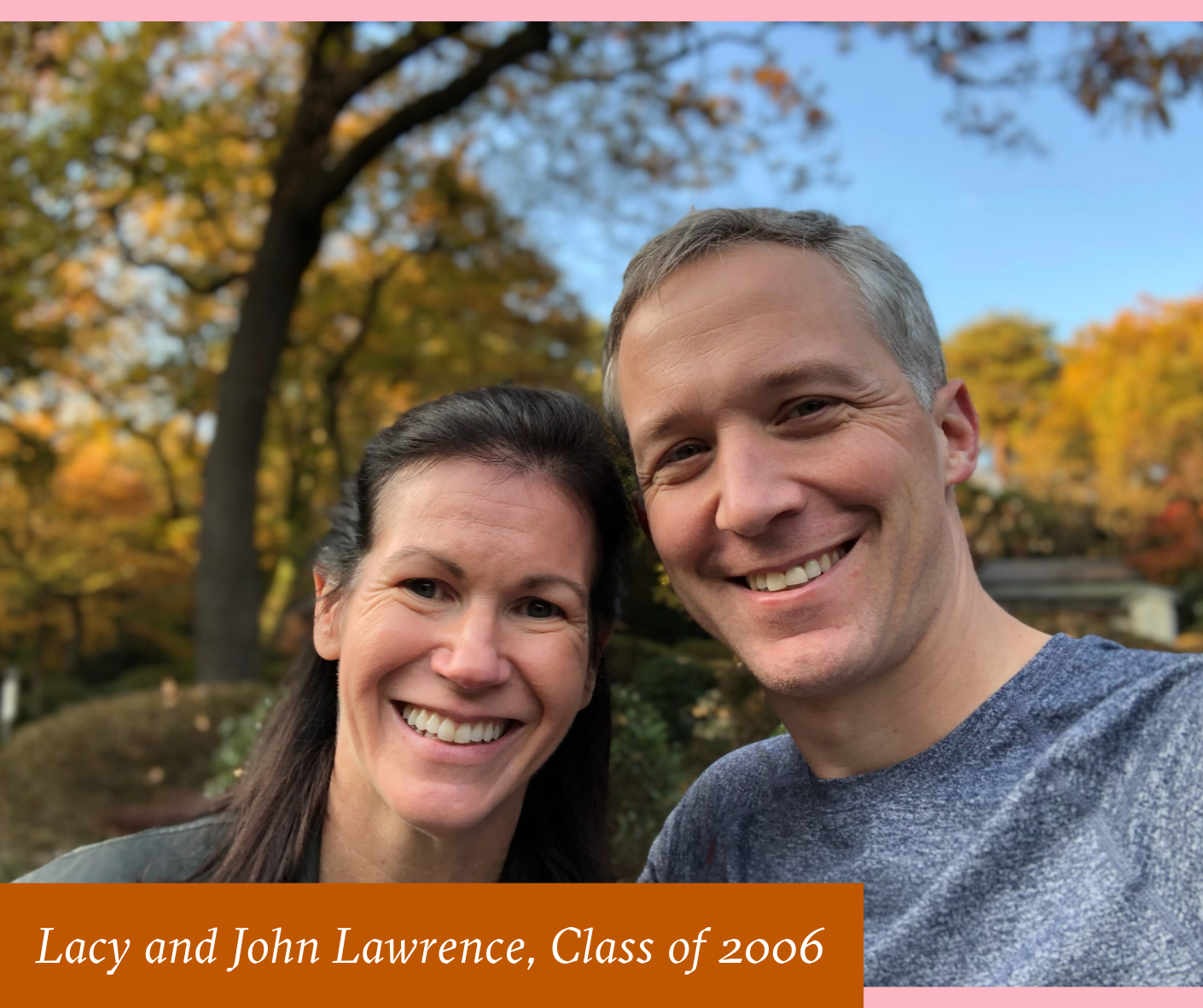 Lacy and John Lawrence, Class of 2006

While we can’t thank UT Law for introducing us (we met in undergrad and had already been dating for three years before setting foot in Townes Hall), we have UT Law to thank for many lifelong friends, some wonderful moments in our relationship, and a great legal training that we use daily to cross-examine our three children.

Did you find a love connection at Texas Law?

Are you still together today? There’s still time to share your story and pictures with us for our ‘Lawyers in Love’ social media feature! Tell us your story here.