One of Texas Law’s pioneers, Albertine Bowie, of the Class of 1956, passed away in March 2020 in Oxford, England, her home of many years. Ms. Bowie, whose husband, Yaw B. Turkson, was a Ghanian diplomat with posts across the globe, led an extraordinary life.  The story of those early graduates is the subject of a detailed Tarlton Law Library digital exhibit.

A family obituary was submitted by Ms. Bowie’s daughter, Elizabeth Turkson. We reprint it here, with permission. 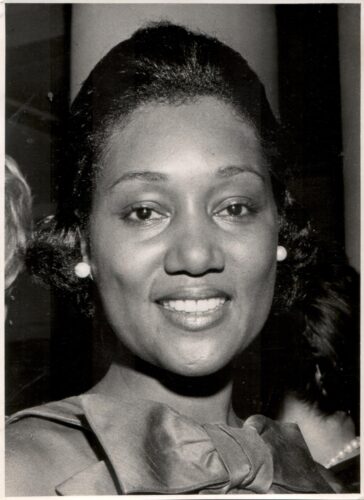 Ms. Bowie moved to Chicago, passed the Chicago Bar examination, and for the next 3 years, she worked as an Assistant Attorney General of the State of Illinois, under the 32nd Governor of the State of Illinois, Mr. William G. Stratton.  In this capacity, she was responsible for the preparation of policies and procedures on human services, and the interpretation of same.  In addition, during this time, she served as a trial attorney with the Attorney General’s department.  Her work and her membership of the Republican Party earned her a place on Richard M. Nixon’s presidential campaign team in Chicago for his 1960 presidential bid.

From 1960 – 1962, Ms. Bowie was an editor for the Commerce Clearing House, Inc. in Chicago.  As an Attorney and Reporter on income tax decisions, Ms. Bowie was also responsible for analysing and preparing summaries relating to U.S Court decisions on income tax questions for inclusion in the monthly periodicals published by Commerce Clearing House Inc.

From 1962-1963, Ms. Bowie worked in a private Attorney practice in Chicago:  Simms and Rodgers.  In 1963, she was appointed special assistant to the Vice Chairman of the women’s division at the Republican National Committee headquarters in Washington D.C.  She was responsible for minority women’s activities in the whole country.  This entailed developing and organising programmes, platforms and raising issues relative to ethnic minority women’s groups in the United States and its territories.  Dr. Leah Wright Rigueur mentioned Ms. Bowie in her 2015 book called ‘The Loneliness of the Black Republican: Pragmatic Politics and the Pursuit of Power’.  Ms. Bowie left the position in 1964 shortly before marrying Yaw B. Turkson, Minister Counsellor (Deputy Chief of Mission) of the Embassy of Ghana in Washington, on September 26, 1964.

In 1965, her husband was appointed one of the first ten Ambassadors of Ghana, and Mrs. Turkson accompanied him on his accreditations to Brazil, Argentina, Ghana, Ethiopia, France, Spain, Portugal and the Holy See.  In the mid-1980s, she returned to Houston for a few years to attend to her elderly widowed mother.  Having taken the Texas Bar Examination, she worked as a lawyer in the City of Houston’s legal department, before joining Houston law firm Mayer, Brown & Platt where she conducted legal research in commercial and civil litigation.  Upon her return to Oxford, U.K. she taught courses on the American Legal System and Constitutional Law at Warnborough College.

In 1990, Mrs. Turkson was one of 23 individuals appointed to the position of President George W. Bush’s Board of Advisors on Historically Black Colleges and Universities (‘HBCUs’).  The Board was tasked with finding ways and means of supporting and strengthening HBCUs.  During that time, the Board was instrumental in securing an increase of $118 million dollars in federal funds – serving to increase the number of African American scientists, engineers, and other professionals in the growing fields of environmental restoration and waste management.