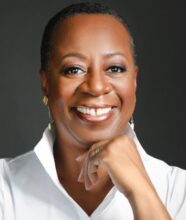 Angela F. Williams ’88 will become the next president and CEO of the United Way Worldwide. Williams will be the first woman and first African American to lead the organization. Her appointment takes effect on October 15, 2021.

“We are always proud of our alumni who show up and do the work of changing the world. You’d be hard-pressed to find a better example of that than Angela Williams,” remarked Liz Hilton ’90 the Law School’s Executive Director of Alumni Relations & Development. “It’s so inspiring to see her blazing a trail and leading nearly 1,800 local United Ways around the world.”

After earning her law degree, Williams began her career serving for more than six years as an active-duty member of the U.S. Air Force Judge Advocate General’s Corps and was an Assistant United States Attorney for the Middle District of Florida. She currently serves as president and CEO of Easterseals, a role she has held since 2018.

United Way fights for the health, education, and financial stability of every person in every community. With global reach and local impact, they aim to impact 48 million people annually. United Way is the world’s largest privately funded nonprofit, working in 95% of U.S. communities and 40 countries and territories. In the wake of COVID-19, United Way is  helping people stay in their homes, stock their pantries, and protect their lives and livelihoods.

Read more about Williams and her new role at unitedway.org/the-latest/press/new-president-and-ceo.