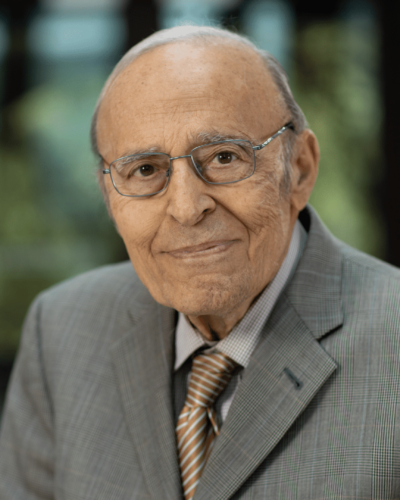 The Law School community is saddened by the passing of Lino Graglia, who died on Jan. 30. Prof. Graglia was a member of the Law School faculty for more than 50 years.

“Lino was an influential scholar in multiple fields and a cherished mentor to many students,” said Dean Ward Farnsworth. “He was also highly respected and well liked by his colleagues, including many who became dear friends despite disagreeing strongly with his views. Those views created a lot of controversy, but there’s no controversy about this: Lino loved the school dearly and served it with devotion and integrity.”

Prof. Graglia was born in Brooklyn. He attended City College of New York and Columbia University School of Law. He then joined the Department of Justice during the first Eisenhower administration and continued there until he entered private practice in 1957; his boss in his early years at the Department was Warren Burger, who would go on to serve as Chief Justice of the United State Supreme Court. Prof. Graglia joined the faculty of the School of Law in 1966. He principally taught courses on Antitrust and Constitutional Law, and published extensively on both subjects.

Prof. Graglia was an outspoken advocate for an originalist approach to interpreting the Constitution. “The security of tenure has enabled Lino to write and teach, against the modern grain, why federal courts’ activist tendencies are legally, logically, and historically wrong,” said Judge Edith Jones, of the United States Court of Appeals for the Fifth Circuit, in a written tribute to Prof. Graglia. “His legacy extends to thousands of students whom he has persuaded either to adopt similar views or at least to understand the difference between authentic legal reasoning and judicial fiat.”

Judge Don Willett of the U.S. Court of Appeals for the Fifth Circuit offered a similar assessment. “Lino has played an outsized role in shaping, and sharpening, the minds of generations of lawyers,” he wrote on the occasion of Prof. Graglia’s retirement. Judge Willett described Prof. Graglia as “intense without pretense.”

Prof. Graglia is survived by his wife of 68 years, Kay, their three children, and seven grandchildren. His daughter Donna Rosenwasser (’86) said that “the law school was the biggest source of joy and satisfaction throughout his life.”

As of publication date, memorial services have not yet been determined.

The family has suggested that those who would like to make a gesture for Lino may make a contribution to the Carolyn & Lino A. Graglia Endowed Scholarship in Law at www.UTLSF.org/graglia.