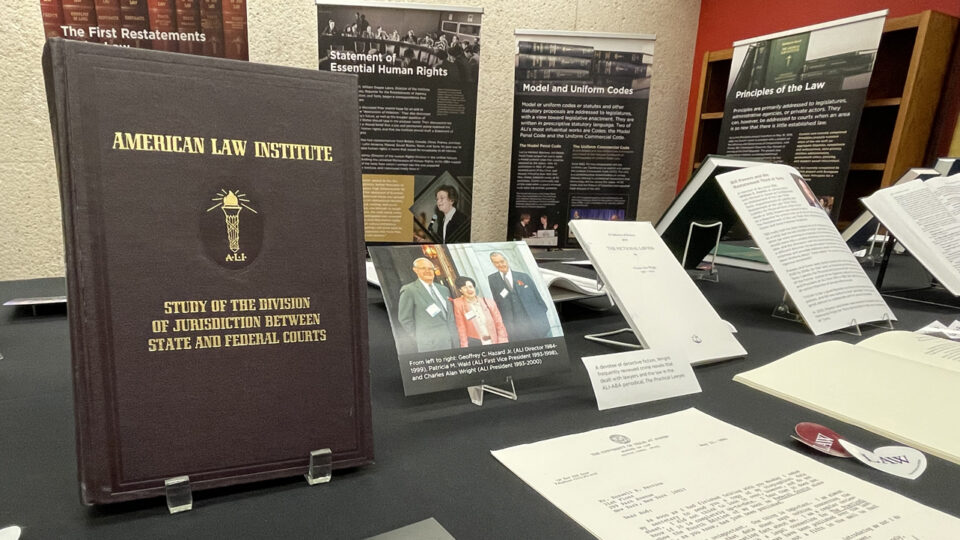 The American Law Institute is marking its 100th anniversary in 2023 with four traveling exhibits that highlight the institute’s groundbreaking and impactful work. One of the four is being showcased at Texas Law, hosted inside the Tarlton Law Library.

“I am delighted that our school can be a home for this remarkable tribute,” said Dean Bobby Chesney. “Texas Law has a strong tradition of deep ties to the American Law Institute, with our faculty and alumni making critical contributions to its important mission over the past century. To be one of just four schools in the country chosen for this celebration is a tremendous honor.”

The exhibit, which was first unveiled last October, will be on display through May.

Materials in the exhibit include original documents, objects, and historical displays that tell the story of the Institute’s century of efforts to clarify, modernize, and otherwise improve the law, along with materials that have been customized for the Texas Law community, including sections that honor former deans Ward Farnsworth and William C. Powers, Jr., and long-time professor Charles Alan Wright, who also served as ALI president. All three served as ALI reporters who took on the important tasks of structuring projects, preparing drafts, and presenting drafts to project participants for discussion.

In addition, faculty members Linda Mullenix, Charles Silver, and Jay Westbrook, all of whom contributed to ALI publications, are recognized. The display features as well a list of all 28 current Texas Law faculty who are members of the institute. ALI members—judges, lawyers, and academics—represent the legal profession as a whole and come together to produce work intended to aid in the administration of justice. The diversity of voice, from theorists to various kinds of practitioners, is essential to the work the institute produces. 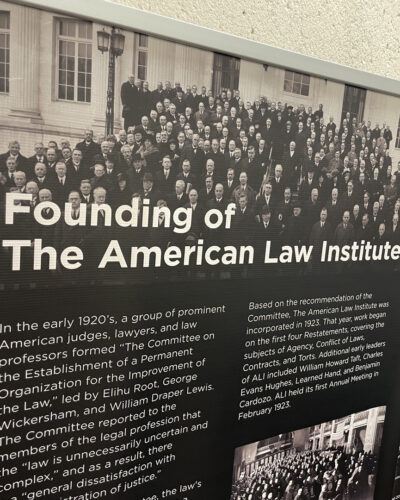 Founded in 1923, the American Law Institute is the leading independent organization in the United States producing scholarly work to clarify and improve the law. The institute drafts, discusses, revises, and publishes Restatements of the Law, Model Codes, and Principles of Law that are enormously influential in the courts and legislatures, as well as in legal scholarship and education.

The 100th Anniversary ALI exhibit is located on the main floor of Tarlton Law Library and is available for viewing during the library’s spring hours. Everyone in the Texas Law community – alumni, faculty, staff, and students – is welcome and encouraged to visit.