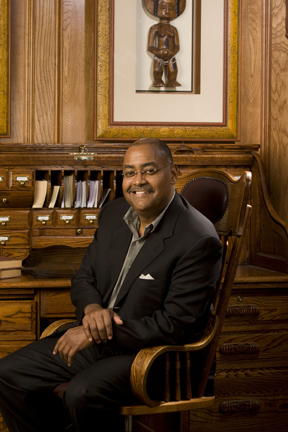 A Life in Politics

Texas State Senator Rodney Ellis, ’79, a Houston Democrat representing District 13, knew from the moment he joined the debate team in junior high school that he wanted to dedicate his life to law. He realized his dream when he graduated from the Law School in 1979, becoming the first lawyer in his family. After a stint on the Houston City Council, he was elected in 1990 to his senate seat. In nearly two decades since, he has written more than 450 bills that have become law.

“I carry a lot of bills,” he said. “I’m all across the board. Some would call it ADD. I would call it realizing there are a lot of people out there.”

He credits his experience at the Law School for preparing him for a life of politics as well as success in the private sector.

“Most of what I do in my public life or in my private life is a direct result of things I learned or experiences I went through while I was at the Law School,” he said. “Being there taught me to analyze issues, comprehend subjects, and then find a way to explain them to other people in a way that’s understandable.”

An added bonus, he notes, is that the school is situated in the state’s capital. “I was a fulltime student and I was working virtually full-time when the legislature was in session,” he recalled. “I took advantage of being in Austin and spent a lot of time around the capitol using the skills I was learning in school to apply in that laboratory. I liked being around lawmakers and being in the middle of the brawl.”

Despite his impressive bill skills, the senator is not inclined to gauge his achievements by quantifying them. “I measure success not by how many bills passed but by taking on the good fights, the big fights,” he said, noting that the path of least resistance holds no appeal. “Sometimes by going after major systemic changes, even if I don’t win, I win at moving the ball and creating an environment for someone else to win it.”

With 2009 being an in-session year for the legislature, the senator has been constantly busy, juggling family life—his wife and four children live in Houston—with legislative duties and his business endeavors, which include his partnership in Rice Financial Products Company, his shareholder status with the Tagos Group, and his duties as counselor for Reaud, Morgan & Quinn.

Ellis keeps a private phone line, computer, and fax in his senate office and returns business calls when he can, early in the morning and late at night. He also squeezes in frequent bike rides around Austin to help him both clear his head and brainstorm new ideas. (His passion for cycling prompted participation in nine multiple sclerosis fundraiser rides, and he counts bicycle safety legislation as a priority.)

This past session, he’s being pushing for criminal justice reforms, working to prevent wrongful convictions, and striving to put more environmental protection measures in place. “Texas is a tough place to pass progressive environmental issues,” he admitted, but he remains undeterred in his efforts, in particular in pushing for a statewide ban on secondhand smoke.

Perhaps his greatest efforts have gone toward protecting the TEXAS Grants program, college scholarship legislation he wrote in 1999 that has since provided nearly $1.2 billion in student aid. Recently he has been fighting what he terms “crippling new restrictions that would have forced thousands of students to lose their aid”— the proposed changes in eligibility standards could, if enacted, cut off many students from much needed assistance. (Last session, he staved off changes that would force students to repay grant money if they did not finish in four years.)

Other legislation he’s written and helped pass includes: the annual three-day sales-tax holiday every August on shoes, clothing, and backpacks to help Texas families prepare for school; increasing juror pay to promote better jury participation and diversity; legislation that requires nonprofit hospitals to provide healthcare services, including charity care, and to comply with all government regulations in order to receive nonprofit tax exemption status; and a “motor-voter program” that allows citizens to register to vote when applying for or renewing their drivers’ licenses. He is particularly proud of passing the James Byrd Jr. Hate Crimes Act, which took him a decade to pass due to partisan gridlock.

Of his critics and detractors he said, “I try to use logic. I try to use personal relationships to get to know people. Sometimes there will be certain advocacy groups I’ll never get along with. I do whatever works—ignore them, go after them publicly—it’s case by case. But I never give up on people. There have been relationships I’ve developed with major detractors and over time I’ve found that if you work at it hard enough and get to know folks, you find you might have more in common than what you disagree on.”

Of the necessity of compromising, he said, “My philosophy is to ask for what you want and take as much as you can get. Sometimes you have to find a way to move the runners gradually as opposed to scoring a home run when you step up to the plate.”

Senator Ellis has his fans, too. His colleague, El Paso Senator Eliot Shapleigh, ’81, said “Ellis is often two sessions ahead of the curve. He sees an issue, then works it with grace, integrity and tenacity. And over time, he makes major reforms happen, often working in the toughest areas of the law. His work on the Innocence Project is just one of many examples of major change that he has delivered for the people of Texas.”

The Innocence Project, aimed at preventing wrongful convictions, is high on Ellis’s priority list. Serving as interim governor—something he has done on dozens of occasions over his tenure—he has presided over three executions. In one instance, he offered a reprieve, which, he said, helped “shed light on DNA legislation I cosponsored and passed.”

Senator Ellis is running for office again next year. “I love what I do,” he said. “I work every day like I just started this job. If I ever get to the point where I’m not as excited as I was when I showed up as a thirty-five-year-old—if I ever lose that zeal—I know it’s time to go.”