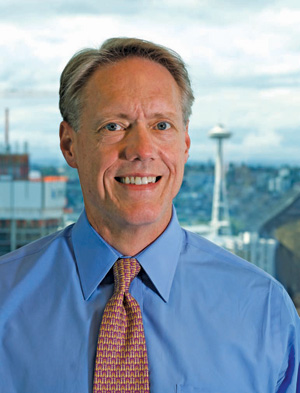 On weekdays, the ferry from Seattle to Bainbridge Island runs about every forty-five minutes or so, setting out toward the island’s Eagle Harbor across Puget Sound. It’s a relatively short trip, but it transports Parker Folse to an island refuge a world away from his legal practice managing Susman Godfrey LLP’s Seattle office.

The charms of Bainbridge Island are, at least in part, the reason that Susman Godfrey, one of the nation’s premier litigation firms, even has a Seattle office. Back in 1994, to celebrate his fortieth birthday, Folse and his wife, Carol, were looking for a place to escape the heat of Houston, where Folse was a partner at Susman Godfrey’s home office. They chose Seattle on a whim.

“I knew a couple that had moved there from Houston,” Folse said. “They lived on Bainbridge Island. So we came up, and on the second day we took the ferry to visit them. It was a gorgeous day. They are both lawyers and commuted by ferry boat. It seemed an idyllic life—the combination of a decent sized city with a good law practice, but living on this island. It was like a throwback to another time.”

Once back in Houston, their vacation over, they found their thoughts returning to Bainbridge Island. “It didn’t take more than about a month and we said, ‘Let’s do this, let’s move there,’” Folse said. “I had no idea what law practice I would have. I thought I would have to leave Susman Godfrey and look for work in Seattle.”

After spending nearly his entire life in Texas, Folse was ready for a change. Born and raised in Austin, he left to attend Harvard as an undergraduate but then returned to enroll in the Law School.

“I had heard for a long time that if you want to practice law in Texas, the best place to go is UT because of the network of alumni,” he said. “I didn’t have my mind set on anything but coming back to Texas to be a lawyer.”

Folse was the editor-in-chief of the Texas Law Review while earning his law degree in 1980. He then served as a law clerk to the Honorable Joseph T. Sneed, United States Court of Appeals for the Ninth Circuit, and then Justice William H. Rehnquist, United States Supreme Court, before joining Susman Godfrey in 1984 after a short stint with a firm in Arizona. He became a partner a year later.

When Folse broke the news about moving, the firm wasn’t enthusiastic about the departure of a talented litigator. Instead, they suggested Folse open a satellite office in Seattle.

“There was a big question in my mind whether I could come out here and support myself and the firm’s investment,” Folse said. “I didn’t know anybody and had no clients in the Northwest. But the more I thought about it, the more it made sense. I loved the firm and had a lot of friends there.”

Thus began a stretch of regular visits to Seattle to learn as much about the litigation market as he could—the firms, the lawyers, and the nature of the bar. Finally, after a year of preparation, Folse and his family made the move. He set up shop by himself in sub-leased office space, hired a secretary, and got to work.

It was slow at first, but then the firm was hired for a case in Alaska that would prove pivotal. Folse spent four months trying the case in Anchorage—and lost. But the connections he made during those months would lead to work that would help ensure the Seattle office’s future.

One particularly significant case was an antitrust suit against Microsoft. Susman Godfrey represented plaintiff Caldera, which offered a competing operating system. That case was settled successfully a few weeks before it was to go to trial. “That gave us visibility as a firm that would take on Microsoft in a big antitrust case,” Folse said. “That led to others and it became useful for the firm to be here from that point.”

More successes followed, including a negotiated $536 million settlement with Microsoft on behalf of Novell that resulted in the largest contingency fee ever earned by the firm. While it might not have seemed so at the outset, supporting Folse’s move to Seattle turned out to be a shrewd investment for Susman Godfrey. The firm’s Seattle office has now grown to fourteen lawyers.

Even half a continent away, Folse retains ties to Texas and the University. He recently returned to receive the 2008 Leon Green Award from the Law School in recognition of his continuing support and many contributions to the legal profession.

But his home is now on Bainbridge Island and his practice in Seattle, where he has been recognized as one of six “Top Lawyers” in business litigation by Seattle magazine and a “Top 100 Super Lawyer” among business litigators in the state by Washington Law & Politics magazine. And while leaving Texas certainly brought about changes, they weren’t necessarily those he was expecting.

“I will say that it has not worked out as I originally saw in my mind’s eye,” Folse said. “Part of the idea was not to work as hard as in Texas. I figured I’d probably have a less interesting law practice, but enjoy living in the Northwest more. I’m not complaining, but I haven’t slowed down at all.”