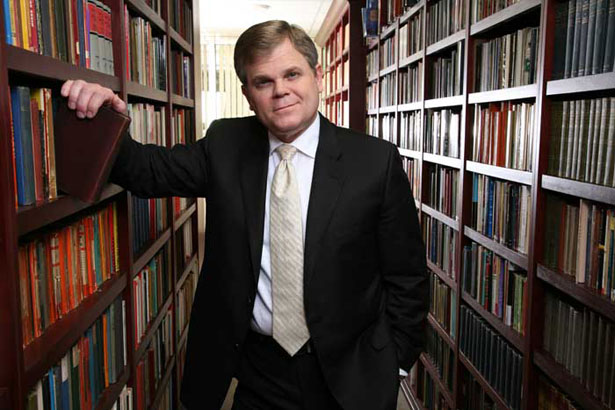 The Law School has produced numerous judges, honored (and feared) prosecutors, towering trial lawyers, countless corporate and public-interest lawyers, and one Supreme Court justice. But Bryan Garner, ’84, recognized as the nation’s foremost expert on usage and grammar in American English, rivals any of them in terms of influence in his field.

In a long 2001 Harper’s review of what is probably Garner’s best-known book, A Dictionary of Modern American Usage (now published as Garner’s Modern American Usage) the late novelist and essayist David Foster Wallace hailed Garner as a “genius” for his deft explanations of tricky grammatical and usage as well as for the democratic spirit in which Garner’s work resolves the tension between “prescriptivists” (snooty grammar snobs) and “descriptivists” (overly permissive grammar slobs). And it is true you will not find a better book if you are interested in learning things like the difference between less and fewer; the intricacies of when to use that or which; whether kiwifruit is one word or two (it’s one); or what to call residents of Corpus Christi (Corpus Christians).

Garner has been interested in the rules of grammar and usage and good writing since he was very young. He credits his grandfather, Meade F. Griffin, ’17, a former justice on the Supreme Court of Texas, for introducing him to Webster’s Second New International Dictionary when he was a child by using the great unabridged tome as a booster seat for the young Garner.

Later, Garner said he spent hours studying the dictionary in an attempt to impress girls, and by the time he figured out that it was not working particularly well, he had become a serious lexicographer. The career path to becoming a working lexicographer and usage expert, however, is not a straightforward one, so Garner came to the Law School after graduating from the University of Texas at Austin, hoping to follow in his grandfather’s footsteps as a practicing lawyer or even a judge. But after graduating in 1984 and joining a law firm in Dallas, Garner could not resist the urge to write about usage and writing.

“Although I entered legal practice in 1984 with the idea of practicing law for the rest of my career, I was also determined to write books—reference books, mostly,” Garner said. “But when my first book, A Dictionary of Modern Legal Usage, appeared in 1987, and I was a second-year associate at a Dallas firm, my authorship seemed to be more resented than admired by my colleagues. That’s when I thought the groves of academe might be more congenial.”

Garner then came to the Law School, where he took up a position as a visiting associate professor. Garner said he enjoyed his scholarly work and teaching, but his focus on legal writing might have hindered his scholarly career.

“When I told the dean at the time that my main interest was legal writing—and by that time I’d written my second book, The Elements of Legal Style—he said that I’d never be taken seriously by any major law faculty if I wanted to teach that subject. Unfortunately, he was probably right.”

In order to continue teaching legal writing (and continue to write books), in 1991 Garner founded the Dallas-based company, LawProse Inc., which offers continuing legal education courses to lawyers and judges. Garner said he’s had more than 150,000 lawyers participate in his legal writing, editing, and drafting seminars since that year. Through LawProse, he also consults on editorial projects such as pattern jury instructions, court rules, consumer contracts, and appellate briefs.

Garner said his seminars and writing classes have exposed him to a great deal of anxiety over writing on the part of lawyers (as well as much unfounded confidence in their own writing ability). “The business model of LawProse has always been to figure out what most lawyers do poorly and teach them how to do it well,” Garner said. “A big part of the challenge is to convince those lawyers who think they’re quite good writers that their self-assessments are overgenerous, often laughably so. Over the years, I’ve discovered that litigators are mostly ill-equipped to frame legal issues (and lack the courage to state them plainly and persuasively up front), and that transactional lawyers are disastrously ineffective at expressing contractual duties. These are the most important things that lawyers do: litigators frame issues, and transactional lawyers express duties. Most law schools do little if anything to ameliorate these rampant problems, and so a big part of my career has been devoted to helping practicing lawyers learn what the law schools have failed to teach them. I’m proud to say, by the way, that UT Law is an exception—Wayne Schiess has been a major leader in the field.”

Law schools’ and legal firms’ lack of emphasis on good writing has allowed Garner to turn his passion for good writing and usage into a valuable practice. “I like the idea of changing lives,” Garner said. “Several times each week, someone will say something like this: ‘Although I was an English major, I stopped writing well long ago because I thought you had to do things the ‘legal’ way. You’ve made me realize how it’s possible to write well in this profession.’ Or: ‘Even though I’m a lawyer, I never thought of myself as a professional writer. Thank you for showing me that that’s what I am.’ But I enjoy tweaking legal academia. Because the law schools won’t or can’t reform, there’s a lucrative profession in CLE. I just love that. And meanwhile, in my own small way, I’m having a positive impact on the world. I can’t imagine anything more fulfilling.”

But Garner’s “tweaking” of legal academia has caused most controversy on a subject ignored by many outside the ivory tower: footnotes.  “I’m against footnotes,” Garner said. “I think you should never use them—except for bibliographic material (such as 123 F.3d 464, 466). Second, all such merely bibliographic material should be relegated to footnotes. I can’t imagine why otherwise intelligent writers would want to pollute their text with extraneous characters, when that practice is just a carryover from the limitations of typewriters. Here we are in 2009, stuck in a stylistic rut necessitated by pre-1980 technology. Third, no one should have to bounce down to footnotes. You should say in the text what your major authorities are and how old they are. I would never have guessed that this part of my campaign—and, let’s face it, I’m campaigning for the betterment of legal writing—would spark such debate. Then again, the law is a conservative profession, and people don’t want to depart much from how things have been done in the past.”

Garner has publicly debated the footnote issue with  Supreme Court Justice Antonin Scalia and Seventh Circuit Court Judge Richard Posner, both of whom prefer traditional legal citation style. “When Justice Scalia and I squared off on this point during our presentation at the Kennedy Center in July 2008, the crowd of 750 lawyers voted on the question and split fifty-fifty,” Garner said. “But I’m convinced that I’ll prevail in the end. The profession will adopt this practice of footnoting citations and will mostly forswear substantive footnotes, I hope. By the way, no single cosmetic change can so immediately lay bare shoddy writing and shoddy analysis than stripping out the citations. It’s time that we eliminated all the camouflage that lets mediocre writers believe they’re so much better than they really are.” Despite Garner’s strong disagreement with Scalia on this issue, it hasn’t prevented the two from writing a book together, Making Your Case: The Art of Persuading Judges, which was published in 2008. It was named “Law Book of the Year” by the Burton Awards Committee, which honored Justice Scalia and Garner in a ceremony at the Library of Congress.

Ultimately, Garner sees his role as aiding lawyers, legal scholars, and writers in general to write clearly and well, a task of paramount importance in the law and in the larger culture and society, as well. From an early interest in words to a career in legal education to a writer and grammatical expert eager to shake up legal complacency about writing, Garner has carved out a unique niche. “Essentially, my story is a series of migrations for purposes of finding a more congenial environment for doing the work I love,” Garner said. “Ultimately, I had to migrate to an environment that I invented.”