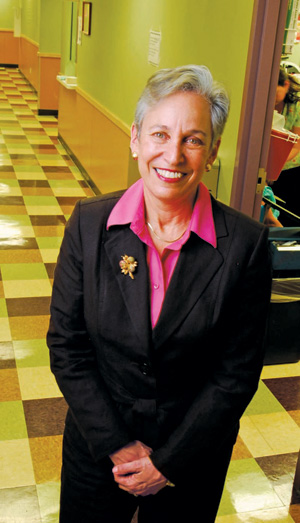 Whether advocating for health care for the uninsured or rowing as the sun rises on Lady Bird Lake, Regina Rogoff is not afraid of a new challenge. “I always knew I wanted to be involved with social change in some way,” said Regina Rogoff, ’73, chief executive officer of People’s Community Clinic in Austin. Growing up in the volatile 1960s, Rogoff was influenced by the social environment of the period.

“I didn’t know what I wanted to do, but I knew I would not be a revolutionary,” she said. “It seemed to me that the legal process was the most effective way to create change in our country.”

Rogoff, originally from Long Island, N.Y., earned a bachelor’s degree from the University of Michigan-Ann Arbor, and then headed to Austin for law school. Upon graduation from UT Law, she began her career as a VISTA lawyer, then went to Legal Aid of Central Texas where she was executive director for twenty years and a staff attorney for ten years.

Rogoff admits that running a nonprofit health care clinic was not her original career choice. She has, however, always had a special interest in health care and while a lawyer at Legal Aid, she sued a local hospital to provide care to Medicaid recipients. This action spurred significant, widespread change in admitting practices at that time. In addition, she served on the board of People’s Free Clinic, a health clinic located in the basement of a church right off the UT campus on the “Drag.” When the executive position at People’s became available five years ago, she said she managed to persuade the board “that if I could manage lawyers, I could manage doctors.”

She now serves as CEO of that same basement clinic, now evolved as the People’s Community Clinic and located in a medical facility off of IH-35. In this role, Rogoff has taken on one of the thorniest issues in the Lone Star State—health care for the underserved. “It is a fascinating time to be in health care because we are riding the crest of a huge crisis. Being in Texas, of all states, with the highest rate of uninsured in the nation, and now with the third highest increase in health care premiums in the nation, it’s the perfect storm,” she said.

“Even as an employer in the medical field, my ability to provide health care to my own employees is limited. Our mission is to improve health by providing affordable, quality health care to the uninsured, but many of my own employees can’t afford to cover their dependents because premiums are so high,” Rogoff added. “Our current health care system is so fragmented and fractured. When you are in this industry, it is hard not to recognize that there has to be some major change.”

Rogoff herself has a chronic condition, osteoporosis, that she keeps at bay with a most Austin-like endeavor. “I was encouraged to get physical activity, and a friend introduced me to rowing,” she explained. Bit by the “rowing bug,” Rogoff is now a member of several different crews that row out of the Austin Rowing Club.

“As a middle-aged woman, I never thought I would consider myself a jock, but here I am,” she laughed. As a crew member, she particularly enjoys the camaraderie of working with a group and being on a team. “To do it well takes a lot of concentration; you really can’t be daydreaming about work, you have to be attentive to what you’re doing and focused. It’s a very good way to get away from work and clear your mind.”

Rogoff is married to Sam Jones, a CPA, and they have two daughters, Alissa Jones Zachary, an attorney, and Sarah Jones, a recent graduate of Austin Community College. In the past thirty-five years, Rogoff has served in leadership positions for a number of civic, community, and legal organizations. The Austin Bar Association created the Regina Rogoff Award in her honor to be given annually to an attorney in Travis County who demonstrates outstanding service in the public/nonprofit sector.

Though Rogoff may never have wanted to be a revolutionary, she has spent the better part of four decades helping people gain access to our justice system and is now contributing to a grassroots evolution in how health care is delivered in Travis County.