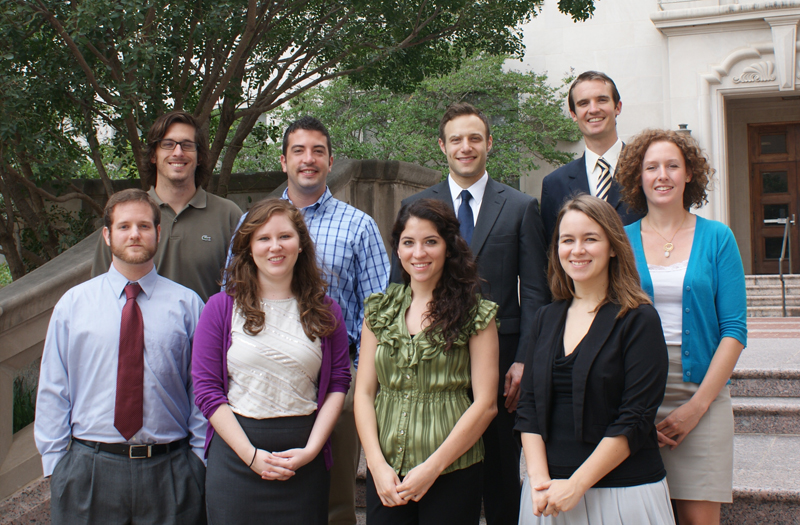 Ten University of Texas School of Law students have been selected by the Bernard and Audre Rapoport Center for Human Rights and Justice as Rapoport Center Fellows for summer and fall 2012. They will work with nongovernmental and intergovernmental organizations in destinations as diverse as Mumbai, India; Washington, D.C.; and Guatemala City, Guatemala. Their projects include investigating cases of disappeared persons, implementing corporate accountability campaigns, assisting in genocide prosecutions, researching litigation on prisoners’ rights, and building the legal capacity of impoverished populations.

The fellowships, which provide stipends for travel costs and living expenses, are made possible by the generous support of: The Planethood Foundation; Scott Hendler of HendlerLaw PC, who donated funds for the Charles Moyer Summer Human Rights Fellowship; the Orlando Letelier and Ronnie Karpen Moffitt Endowed Presidential Scholarship in Law; and the Effie and Wofford Cain Foundation.

The recipients of this year’s fellowships are:

Alejandra Avila (BBA 2011, Texas A&M International University; JD expected 2014) is the first recipient of the Charles Moyer Summer Human Rights Fellowship, which honors the life and work of Charles Moyer, whose professional career has been devoted to the international protection of human rights. Moyer was the first secretary of the Inter-American Court of Human Rights in San José, Costa Rica, the institution with which Avila will be working. As an intern this summer, she will conduct research on various human rights issues and analyze international human rights jurisprudence. Before coming to the Law School, Avila interned at Pretrial Services for the District of Columbia. As a law student, she has translated for the Community Development Clinic, participated in the Colonias Project in El Paso, and volunteered for American Gateways in Austin. She hopes to pursue a career in public service with a focus on Latin America.

Will Chambers (BA 2010, Texas A&M University; JD expected 2014) will work this summer with the Myrna Mack Foundation in Guatemala City, Guatemala, using the National Police Historical Archive to research persons disappeared during the Guatemalan Civil War and provide information to their families. As an undergraduate, he traveled extensively in China, where he studied Chinese language and culture, and spent a semester interning at the Department of Defense’s Office of Legislative Counsel, where he assisted staff attorneys in preparing the National Defense Authorization Act. In the fall, he will be enrolled in the Law School’s Human Rights Clinic and intends to pursue a career in international human rights law.

Mark Dawson (BA 2007, John Brown University; JD expected 2014) will intern this summer with Human Rights Law Network (HRLN) in Mumbai, India, a collective of lawyers and social activists dedicated to the use of the legal system to advance human rights in India and the sub-continent through pro bono legal services and public interest litigation. HRLN seeks to enforce the rights of marginalized people and to challenge oppression, exploitation, and discrimination. Dawson will conduct research, draft public interest petitions, and work on litigation. As an undergraduate, Dawson studied Community Development in Fiji. Since 2007, he has been the director of development of an orphanage in rural Kenya. He hopes to pursue international human rights law after graduation and focus on increasing access to justice in the developing world.

Scott Mandarich (BA 2008, Indiana University; JD expected 2013) will work this summer with Proyecto de Derechos Económicos, Sociales y Culturales AC (PRODESC) in Mexico City, Mexico, a nonprofit organization working to promote economic, social, and cultural rights throughout Mexico. His work at PRODESC will focus on the development and implementation of transnational corporate accountability campaigns to stem human rights abuses committed by multinational energy companies in Durango and Oaxaca, Mexico. As an undergraduate, Mandarich spent time abroad at both the Tecnológico de Monterrey in Cuernavaca, Mexico, and the Universidad de Buenos Aires in Argentina. After graduation, he worked as an English instructor in the Madrid, Spain, public school system. Scott hopes to pursue his interests in public international law and transnational investment.

Mackenzie Meador (BA 2009, University of Texas at Austin; JD expected 2014) will spend the summer interning with the Paso Del Norte Civil Rights Project, which provides legal services and community education to indigent clients in West Texas and southern New Mexico with a focus on creating structural change in the areas of civil rights and economic justice. Meador will support civil litigation, conduct discovery, and organize community education trainings on human rights issues. She has volunteered with Texas RioGrande Legal Aid and the Texas Civil Rights Project and will be enrolled in the Law School’s Transnational Worker Rights Clinic in the fall. After law school, she hopes to pursue a career in public-interest law that focuses on underserved and low-income communities.

Ryan Meltzer (BA 2007, Vassar College; JD expected 2014) will work this summer at the American Civil Liberties Union of Texas. As part of the ACLU’s criminal law reform campaign, Meltzer will work on impact litigation and policy initiatives addressing over-incarceration, solitary confinement, and private prison issues which disproportionately affect minority and immigrant populations. He will investigate complaints, assist in ongoing litigation, conduct research, and prepare legal memoranda. Before law school, Meltzer worked for the New York Civilian Complaint Review Board investigating allegations of misconduct by members of the NYPD. He hopes to pursue a career in criminal law or civil rights law, representing indigent defendants or engaging in impact litigation on behalf of marginalized groups.

Salima Pirmohamed (BA 2003, University of Houston; JD expected 2013) will intern with the International Criminal Tribunal for Rwanda (ICTR) in Arusha, Tanzania, during the fall. Pirmohamed will assist in the prosecution and punishment of persons responsible for genocide and other serious violations of international humanitarian law committed in Rwanda and its neighboring states. Last summer, Pirmohamed worked with the Equal Justice Center, representing low-wage transnational workers in their unpaid contract and wages claims. She currently works with the Capital Punishment Clinic, where she assists in the representation of indigent defendants convicted of capital offenses, and will continue her work in capital criminal defense this summer at the Texas Defender Service in Houston. She plans to pursue a career as a human rights lawyer.

Derek VerHagen (BBA 2009, Texas Christian University; JD expected 2013) will intern this summer and fall with the International Criminal Tribunal for the Former Yugoslavia (ICTY) in The Hague, The Netherlands. The ICTY deals with war crimes that took place in the former Yugoslavia during the 1990s. VerHagen will perform legal research, prepare memoranda, and assist with documentary evidence related to the prosecution of the accused. He has worked as a student attorney with the Law School’s Capital Punishment Clinic over the past year and hopes to pursue a career devoted to protecting human and civil rights.

Gwen Vindell (BBA 2010, University of Texas at Austin; JD expected 2013) will intern this summer with the Inter-American Commission of Human Rights in Washington, D.C. The Commission is a body of the Organization of American States that promotes and protects human rights in the Americas. Vindell will conduct research, prepare reports, and analyze policies impacting human rights in the Americas. While in law school, Vindell has worked in the National Security and Immigration Clinics. Last summer, she worked for the U.S. House of Representatives Foreign Affairs Committee. She will be studying abroad in Buenos Aires, Argentina, in the fall of 2012. After law school, she hopes to pursue a career in public-interest law, with a focus on international law.

Catherine Wagner (BA 2007, Boston University; JD expected 2014) will intern with the Texas Civil Rights Project (TCRP) in Austin this summer. Her work will focus on civil and human rights issues including police brutality, prisoners’ rights, and disability discrimination which affect immigrants, transnational workers, and other marginalized individuals. In addition to legal research and writing, she will interview potential clients and engage in further client interaction, investigation, and research for cases TCRP pursues. Wagner developed a special passion for creating change through legal systems while studying abroad in Geneva, Switzerland, and Niamey, Niger, and has spent the last four years working on human rights and social justice campaigns with nonprofit organizations in Washington, D.C. Her experiences in campaign-based advocacy led her to pursue a career as a public-interest lawyer.