Eleven Law School students have been selected by the Bernard and Audre Rapoport Center for Human Rights and Justice as Rapoport Center Fellows for summer and fall 2013. They will work with nongovernmental and intergovernmental organizations in the United States and abroad. Their projects include aiding human rights victims and political refugees, researching civil rights and civil liberties, assisting international courts and tribunals in prosecuting human rights and humanitarian violations, advocating for individuals with disabilities, and pursuing impact litigation on behalf of farmworkers. 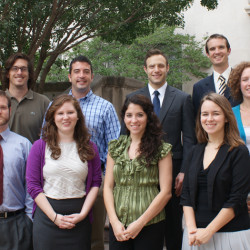 Eleven University of Texas School of Law students have been selected by the Bernard and Audre Rapoport Center for Human Rights and Justice as Rapoport Center Fellows for summer and fall 2012. They will work with nongovernmental and intergovernmental organizations in destinations as diverse as Mumbai, India; Washington, D.C.; and Guatemala City, Guatemala. Their projects include investigating cases of disappeared persons, implementing corporate accountability campaigns, assisting in genocide prosecutions, researching litigation on prisoners’ rights, and building the legal capacity of impoverished populations.

Four members of the Class of 2012 have received post-graduate fellowships from Equal Justice Works, a nonprofit organization based in Washington, D.C., whose declared mission is to support “the next generation of lawyers who commit themselves to public interest law and endeavor to provide effective representation to underserved communities and causes.” Christine Nishimura, Jordan Pollock, Amelia Ruiz Fischer, and Keegan Warren-Clem received the prestigious two-year fellowships, which provide competitive salaries and loan repayment assistance after graduation. 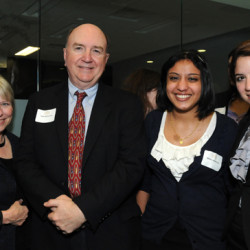 The 2012 Scholarship and Fellowship Reception

To honor our scholarship donors and recipients, the Law School hosts an annual event at which our students, and those whose charitable giving has helped them, can become acquainted. This year’s Scholarship and Fellowship Reception was held on January 26, 2012.

Mary Murphy, ’11, has been awarded a Public Defender Corps fellowship. Her Fellowship project will be with the Orleans Public Defenders in New Orleans, Louisiana, a relatively new office that defends the poor and indigent in Orleans Parish.

Adriana Rodriguez, ’11, and Michelle Smith, ’11, have been awarded Equal Justice Works Fellowships to work for nonprofit legal organizations after their graduation.

Eight students from the University of Texas School of Law have been selected by the Bernard and Audre Rapoport Center for Human Rights and Justice as Rapoport Center Summer Fellows. They will fan out to nongovernmental and intergovernmental organizations in destinations as diverse as London; Washington, D.C.; and Phnom Penh, Cambodia. Their projects include building the legal capacity of marginalized groups, assisting in war crimes prosecutions, representing victims of family violence, increasing compliance with international human rights treaties, and advocating for the rights of low-income workers.

Bill Whitehurst, ’70, and his wife, Stephanie, recently announced that they will give the University of Texas School of Law $125,000 over the next five years to fund the Whitehurst Public Interest Summer Fellowships program.