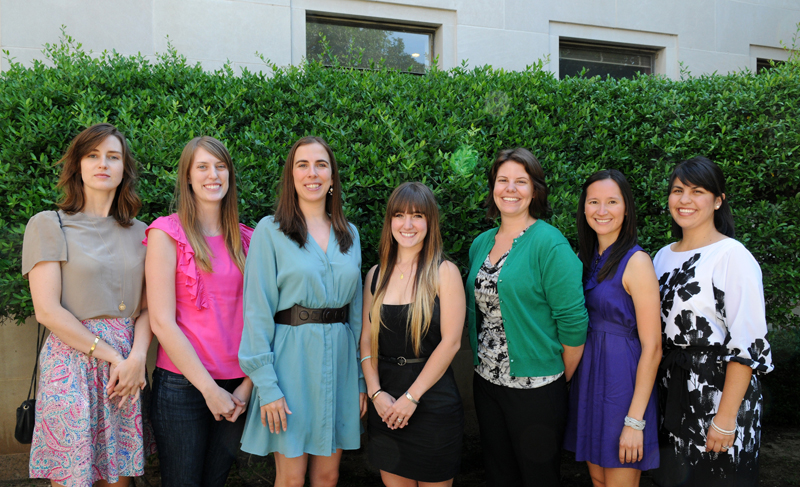 Seven graduating students at the University of Texas School of Law have been honored by the William Wayne Justice Center for Public Interest Law for their extraordinary commitment during Law School to using the law to serve others.

This annual award honors graduating law students for work in the nonprofit, government, and legislative sectors, as well as participation in clinical courses, pro bono projects, and student groups. The award winners were recognized by Interim Dean Stefanie Lindquist at a reception at the Law School, and will each receive $500. In addition, Barbri has generously provided the award winners with $500 discounts for bar review courses.

“We are proud to recognize these outstanding students for their exemplary service,” said Professor Eden Harrington, director of the Justice Center. “They will be leaders in the profession, and the Law School is honored to help them launch their careers.”

Kimberly Ashworth participated in the Juvenile Justice Clinic and the Domestic Violence Clinic. She was president of Texas Law Fellowships, administrative editor of the Texas Journal on Civil Liberties and Civil Rights, and symposium coordinator for the Public Interest Law Association. She interned with the Cook County State’s Attorney’s Office, the Travis County District Attorney, the New York County District Attorney’s Office, and the Travis County Juvenile Court. She has also volunteered for Disability Rights Texas and Texas RioGrande Legal Aid. Ashworth plans to represent victims of domestic violence in family law cases.

Amelia Ruiz Fischer participated in the Immigration Clinic, the Transnational Worker Rights Clinic, and the Criminal Defense Clinic. She was vice president for client relations for the Domestic Violence Survivor Support Network, the mentor coordinator for Street Law, and a member of the National Lawyers Guild and the National Immigration Project. She worked for the Texas Civil Rights Project in its Austin office and a criminal defense firm in Spain. Fischer has been awarded a two-year post-graduate fellowship, funded by Equal Justice Works. She will work at the Texas Civil Rights Project on a project assisting undocumented immigrants affected by the federal government’s Secure Communities program.

Hannah Liddell participated in the Transnational Worker Rights Clinic and the Domestic Violence Clinic. She has been active in the Domestic Violence Survivor Support Network and Street Law. She interned with the Travis County Office of Parental Representation and Disability Rights Texas. Liddell plans to take the California Bar and to pursue a public-interest career in Los Angeles, California.

Christine Nishimura participated in the Children’s Rights Clinic and the Juvenile Justice Clinic. She was managing editor of the Texas Journal on Civil Liberties and Civil Rights and copresident of Youth Court. She worked for the Center for Juvenile Law and Policy in Los Angeles, California, and Disability Rights Texas. Nishimura has been awarded a two-year post-graduate fellowship, funded by Equal Justice Works. She will work at Disability Rights Texas representing minority special education students who are at risk of entering the juvenile justice system.

Alissa Parsley participated in the Immigration Clinic and was staff editor of the Texas International Law Journal. Last fall she studied international refugee law in Buenos Aires, Argentina, and helped draft a UNICEF report on the status of children refugees. She has worked for the ACLU of Texas and American Gateways. Parsley plans to work for a small firm in Austin and eventually hopes to practice immigration law.

Jordan Pollock participated in the Immigration Clinic and was copresident of the Public Interest Law Association and a member of the National Lawyers Guild and the National Immigration Project. She worked with the Northwest Immigrant Rights Project in Seattle, Washington, and the ACLU of California in Los Angeles. She also volunteered at the Equal Justice Center and American Gateways in Austin. Pollock has been awarded a two-year post-graduate fellowship funded by Equal Justice Works. She will work at Public Counsel in Los Angeles representing immigrant detainees at a detention facility in Orange County.

Emma Quintero participated in the Criminal Defense Clinic and the Actual Innocence Clinic. She was active in Youth Court and the Chicano/Hispanic Law Students Association. She has interned with the Travis County Juvenile Public Defender’s Office, the Texas Department of Criminal Justice State Counsel for Offenders, and the Texas Fair Defense Project. Quintero plans to work as a public defender.