The William Wayne Justice Center for Public Interest Law at The University of Texas School of Law presents talks by Douglas Laycock, one of the nation’s leading constitutional law scholars, March 27 and 28 at the law school. Laycock is UT Law’s third G. Rollie White Public Interest Scholar in Residence. 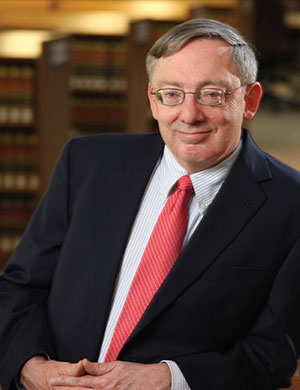 On Thursday, March 27, Laycock will speak on “Government Prayer and the First Amendment: Town of Greece v. Galloway,” at 11:45 a.m. in the Francis Auditorium, TNH 2.114 (with lunch served). Town of Greece, currently pending before the U.S. Supreme Court, involves legal limits on public prayer in government meetings. Laycock argued before the Court on behalf of Galloway last fall. The event is open to the public.

On Friday, March 28, he will participate in “Diversity in Higher Education Post-Fisher,” a conference at UT Law that will bring together scholars, advocates, educators and students to examine the Supreme Court’s decision in Fisher v. University of Texas at Austin and explore contemporary debates involving diversity in higher education. The conference is currently at capacity and maintaining a waiting list. More information and waitlist registration is available on the conference’s website.

Laycock, the Robert E. Scott Distinguished Professor of Law at the University of Virginia School of Law, is a prominent expert on the law of religious liberty and the law of remedies and has written about a range of constitutional law topics, including sex discrimination, affirmative action and freedom of speech. He has testified frequently before Congress and has argued many cases in the courts. Laycock is vice president of the American Law Institute, a fellow of the American Academy of Arts and Sciences, and the 2009 winner of the National First Freedom Award from the Council on America’s First Freedom. Laycock was on faculty at UT Law from 1981 to 2006, and served as the Associate Dean for Research and the Alice McKean Young Regents Chair in Law.

The G. Rollie White Public Interest Scholar in Residence Program is supported by a generous gift from the G. Rollie White Trust. The program’s purpose is to bring outstanding legal scholars, practitioners and advocates from the field of public service to UT Law to foster discussion of issues related to public interest law, to raise the profile of lawyers working in this area and to encourage students to view public service as an honored and expected part of every legal career. The two previous G. Rollie White Scholars were Kathryn S. Fuller, Chair of the Board of Trustee of the Ford Foundation and former President and CEO of the World Wildlife Fund as well as Marie-Therese Connolly, a MacArthur Fellow and Senior Scholar at the Woodrow Wilson International Center for Scholars.