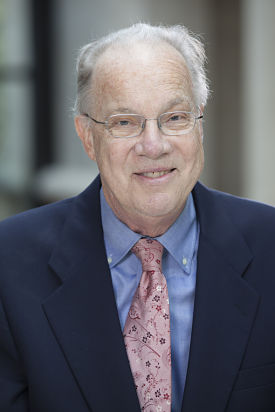 The Law School community is saddened by the sudden passing of Professor John A. Robertson, holder of the Vinson & Elkins Chair and a beloved member of our faculty for over thirty-five years.

Professor Robertson, a renowned bioethics scholar, was honored in 2010 with a lifetime achievement award from the American Society for Law, Medicine & Ethics.

Harvard Law Professor Glenn Cohen, in a memorial for Professor Robertson, noted that “John put the field of law and bioethics on the law school map.”

John Robertson grew up in Maple Shade, New Jersey. After graduating from Dartmouth College in 1964 he attended Harvard Law School, graduating in 1968. He clerked at the Massachusetts Supreme Judicial Court before joining the faculty at the University of Wisconsin Law School in 1973. After seven years in Madison, he joined the University of Texas faculty in 1980.

“John Robertson was an important intellectual leader in his field, a wonderful citizen of the University, and a great friend,” said Ward Farnsworth, Dean of the School of Law.  “His qualities of mind, character, and judgment were rare.  He was regarded with admiration and affection by everyone who knew him, and will be missed by all of us.”

Robertson wrote two landmark books: The Rights of the Critically Ill and Children of Choice: Freedom and the New Reproductive Technologies. In addition, he authored well over 200 articles, book chapters, book reviews, and op-ed pieces. He was a regular expert on National Public Radio, for Texas and national newspapers, and for legislative and regulatory bodies.

“John was keenly interested in how the world worked (or didn’t work) and he steered his impressive intelligence and curiosity toward solving some of the most intractable moral and legal problems — and he did so with an open mind and generous spirit,” recalled colleague and friend Professor Jordan Steiker.

In addition to his pioneering academic work, Professor Robertson was a passionate collector of art, a devotee of nearly all forms of music, and a lover of poetry. But, noted another longtime colleague and friend, Professor Willy Forbath, “John did not have the manner of your stereotypical ‘patron of the arts.’ He had none of the pretense. To the contrary, he just did it for the pleasure of enjoying the company and the work of artists, many of whom were not artists with large reputations.”

Robertson shared his love of art within the walls of the law school.  He was highly involved in choosing the dozens of pieces that line the law school’s fifth and sixth floors, some borrowed from the Blanton Museum, others from galleries and artists in Austin and beyond, and some even taken from his personal collection.

“He was a man of many parts, and an uncommonly modest and warm guy,” Forbath said. “There are not many people at the law school who had such ranging friendships across the campus.”

Professor Robertson was preceded in death by his wife, Carlota Smith, a distinguished linguistics professor at UT who died in 2007.

His survivors include his sister and brother; five nephews and three nieces; his step-children, Alison Smith and Joel Smith, and their families; and his partner, Jane Kielty Stott.

A memorial service for Professor Robertson will be held at the law school in the fall, at a date to be determined later.

Tributes to Prof. Robertson can be found elsewhere on the web, including in The Scientist Magazine, the Bill of Health blog, Bioethicist.net and The Hastings Center.

UPDATE: The law school celebrated the remarkable life and career of Prof. Robertson on November 17, 2017. The event was recorded, and can be viewed here.