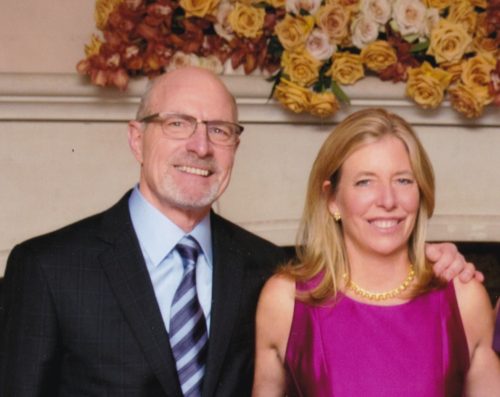 Thanks to a gift from a former prosecutor and her husband, The University of Texas School of Law is opening the Budd Innocence Center to educate law students and improve the criminal justice system by enabling students and faculty to help Texas prisoners seek exoneration for crimes they did not commit.

The Budd Innocence Center is made possible by a $3 million gift from Russell and Dorothy Budd of Dallas.  Dorothy Budd is a former Dallas prosecutor; she and the Budds’ daughter, Peyton Budd ’16, are co-authors of Tested:  How Twelve Wrongly Imprisoned Men Held Onto Hope—a book depicting the courage of prisoners who were later exonerated by DNA evidence.

“This extraordinary gift from the Budd family will let our students pursue one of the most noble aims of all lawyers: to protect the innocent,” said Dean Ward Farnsworth. “Russell and Dori have each dedicated their lives to helping those who have been victims of injustice. This is their passion, and we couldn’t be more pleased to open the Budd Innocence Center to honor the commitment that they’ve made to this cause.”

“We are honored to support the Budd Innocence Center at our alma mater, The University of Texas School of Law,” said the Budds, in a joint statement. “That is because we believe that, as Martin Luther King Jr. said, ‘Injustice anywhere is a threat to justice everywhere.’ For an innocent person to stay in prison because there are not resources available to investigate and prove their innocence is the ultimate injustice.”

The Budds’ gift will establish an endowment that will support the activities of the law school’s Actual Innocence Clinic. Founded in 2003, the Actual Innocence Clinic allows law students to work under the supervision of experienced faculty to investigate claims, prepare briefs, file motions, and work directly with . More than 350 law students have worked with the clinic since its founding.

“Actual Innocence Clinic students are often the driving force in moving cases forward for those who would otherwise be without an advocate in the system,” said Alexandra Bustline ’14, a former clinic student.  “The clinic also gave me an excellent introduction into the realities of the workplace – managing caseloads, making recommendations, conferring with clients, and navigating the legal system and the multiple agencies that the clinic depends on.”

The clinic’s director is Charles Press, who joined the law school faculty in June 2017. Press, who holds a JD from New York University, was previously a clinical professor at the Northern California Innocence Project at Santa Clara University School of Law.  He has a long and distinguished career working on death penalty cases in California and Mississippi.

“I am thrilled to be joining the incredible faculty and students of Texas Law and to work closely with Tiffany Dowling at the Actual Innocence Clinic,” said Press. “And I join Dean Farnsworth in expressing profound gratitude to the Budds. Their generous gift ensures that the clinic can continue its mission of teaching and training future lawyers while providing zealous representation to innocent clients in post-conviction proceedings.”

The launch of the Budd Innocence Center will be celebrated on November 8, 2017, at the School of Law. Special guests will include Barry Scheck, co-founder of the New York City-based Innocence Project, and the Honorable Rodney Ellis, Harris County Commissioner and a former Texas State Senator known for his contributions to improving the criminal justice system in Texas. Also attending will be Anthony Graves, who was exonerated from Texas’ death row in 2010 and founded the Anthony Graves Foundation to promote criminal justice reform.

“We are honored that these renowned leaders are coming to Austin to recognize the launch of this Center,” said Eden Harrington, the Associate Dean for Experiential Education. “Students routinely describe their participation in clinics as one of the most important, rewarding, and educational aspects of their time in law school. We’re so grateful to have the Budd Innocence Center to support the important work of our Actual Innocence Clinic and guarantee that opportunity for future generations of students.”

Russell Budd is a member of the Texas Law Class of 1979. A nationally-recognized trial attorney who has devoted his career to representing individuals and communities injured by corporate malfeasance, Russell is the co-founding partner of the Dallas firm Baron & Budd. Dori Budd graduated from Texas Law in 1983. After a career as a prosecutor in the Dallas County District Attorney’s Office, she became an Episcopal Deacon at The Church of the Incarnation in Dallas.