Many in the Texas Law community are familiar with Virgil C. Lott’s story. In 1953, Lott became the first African American to graduate from The University of Texas Law School and was the first African American to sit on the bench of an Austin court. Today the law school honors Lott’s achievements and memory by awarding the Virgil C. Lott Medal to alumni who have “made significant contributions to the legal profession and to the improvement of understanding among all peoples.”

With this article, Michael Barnes helps readers get to know one of Austin’s most legendary families. We reprint, with permission, a portion of it here. You can read the full article at this link, and learn more about the Virgil C. Lott Medal.

‘MEET ONE OF EAST AUSTIN’S MOST LEGENDARY FAMILIES’

Originally published on The Statesman on April 3, 2020

Mixing in the grand open spaces of the University of Texas Law School last year, the descendants of Oral Rochester “O.R.” Lott Sr. and Viola Madison Lott greeted one another with exceptional warmth.

The distant memories of those ancestors, born of former slaves in the 1890s and builders of a thriving lumber and housing business in East Austin, lingered among the oldest guests.

Yet the assembled progeny were actually present to salute that historical couple’s son, the late Virgil C. Lott Sr. 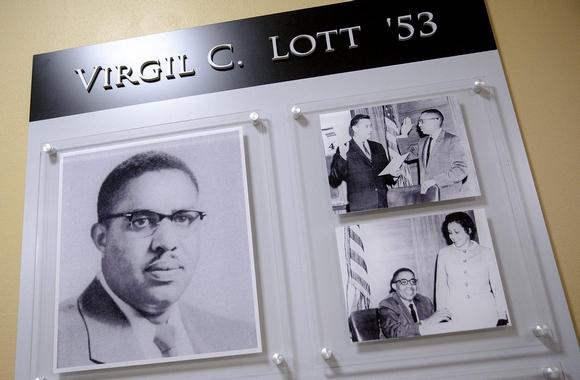 Since 2011, the UT law school has given out the Virgil C. Lott Medal to honorees who “made significant contributions to the legal profession and to the improvement of understanding among all peoples.”

The Lott family were particularly delighted by a new plaque that reminded guests of Virgil’s accomplishments, and they gathered in small and large groups around the memorial for photographs.

“My father pioneered a piece of the black progressive movement during some very dark times,” says Virgil’s daughter, Joycelyn Lott Toliver. “His immediate plan was to simply graduate from law school, but the big payoff was bigger than Daddy. While pushing through the racism and undergoing the worst of circumstances, he created a safe space at the UT Law School for blacks to learn and grow — generations beyond his dreams.”