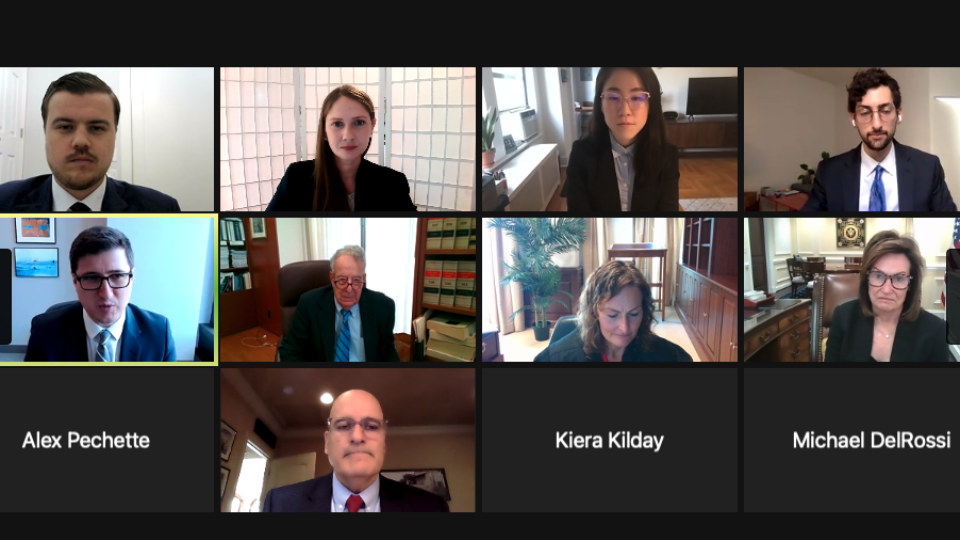 A team of two 3L students, Sarah Propst and Cody Johnson, won top honors at the American Intellectual Property Law Association (AIPLA)’s 2020-21 national Giles S. Rich Moot Court Competition, winning one of the five regional competitions and then beating out nine other regional champions and runners-up to take the national honors. The team was coached by Peter McCabe and John Williams ’19.

“The entire competition was done remotely, which was a real challenge but a great learning experience for how lawyering will probably be done in the next few years,” said Propst.

A three-judge panel of the United States Court of Appeals for the Federal Circuit (consisting of Judges Timothy Dyk, Kathleen O’Malley, and Kara Stoll) announced the winners on April 16. The team captured screenshots (pictured in header) of the panel in the final round. “I look way too serious for a person that just won in the finals,” said Johnson.

“We were ecstatic!” exclaimed McCabe. “Sarah and Cody beat a superb team from Columbia University Law School. They spent over 150 hours – at least – preparing for and competing in this competition. Their victory is well-deserved.”