The Bernard and Audre Rapoport Center for Human Rights and Justice at The University of Texas School of Law has named three law students as Rapoport Center Human Rights Scholars for the 2013–14 school year. Kallie Dale-Ramos, Catherine Wagner and Kyle Shen were selected by a committee of international law faculty on the basis of […] 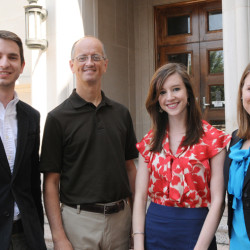 On April 23, 2012, the Law School hosted the final round of the 2012 Thad T. Hutcheson 1L Moot Court Competition in the Eidman Courtroom. Finalists Michael Kelso and Courtney Johnson argued before a venerable panel of jurists.