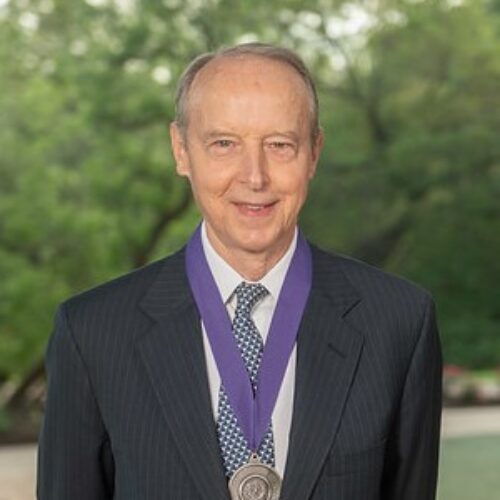 Texas Law alumnus David Beck ’65 has been inducted as a “Texas Legal Legend” by the Litigation Section of the State Bar of Texas. He was presented with the honor at the organization’s annual meeting on June 9, 2022. The namesake of Texas Law’s David J. Beck Center for Legal Research, Writing, and Appellate Advocacy, he recently was honored with the Texas Law Alumni Association’s Lifetime Achievement Award.

The Texas Legal Legend award is intended to memorialize the stories of legendary lawyers who have practiced in Texas, and to use those stories to enhance the public’s understanding of the historical importance of lawyers and the importance of making a difference. It highlights lawyers who have spent their professional careers serving others and taking on challenges that are much bigger than themselves.

Beck founded Beck Redden LLP in Houston in January of 1992 after many years as a senior partner at Fulbright & Jaworski.

“Given the impressive list of those previously inducted, I am deeply honored to even be considered, much less named, a Texas Legal Legend,” said Beck upon learning of his selection. “It has been an honor and a privilege to help our clients solve their legal problems over the years. I sincerely thank them for the trust and confidence they have shown in me and my colleagues at Beck Redden.”

During his career, he served as President of the State Bar of Texas (1995-96), President of the American College of Trial Lawyers (2006-07), President of the International Association of Defense Counsel (1991-92), and currently is on the Board of Trustees and Executive Committee of the Center for American and International Law. He also has received numerous honors throughout his legal career. Beck was named by the National Law Journal as one of the top 10 trial lawyers in the United States and one of the top trial lawyers in the Southwest. He has been included in The Best Lawyers in America© for more than 30 years, in eight separate areas of litigation. He has published numerous law journal articles, been a lecturer for many bar association and law school continuing legal education programs, and won various awards for his legal writing.