Equal Justice Works, a Washington, D.C.-based nonprofit organization, awarded two-year fellowships to three recent graduates of The University of Texas School of Law. Gonzalo Serrano, ’14, Erin Gaines, ’13, and Megan Sheffield, ’13, were among nearly 60 fellows selected nationwide for the Equal Justice Works Fellowship Class of 2014. The organization is dedicated to creating […] 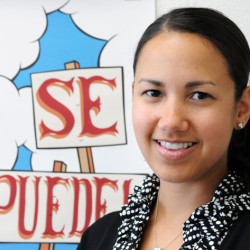 In celebration of National Pro Bono Week (October 21–27, 2012), the UT Law Pro Bono Program is pleased to announce that third-year student Megan Sheffield has been selected to serve as a Pro Bono Scholar for the 2012–2013 academic year. The Pro Bono Scholars Program provides scholarships to second- and third-year students who commit to working with the UT Law Pro Bono Program a minimum of three hundred hours during the academic year. The scholars plan and implement pro bono projects and conduct research and outreach that furthers the mission of the program.