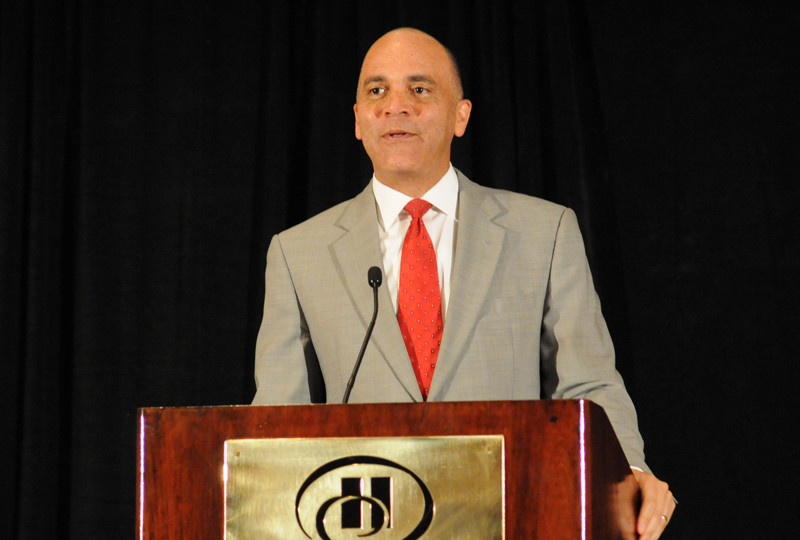 Featuring a keynote address delivered by recently retired U.S. Supreme Court Justice John Paul Stevens, the Texas Law Review celebrated another successful academic year with a banquet on Saturday, April 14, 2012. Since 1965, TLR’s annual banquet has served as a gathering place for UT Law students and TLR alumni and leaders from around the country, allowing judges, faculty members, attorneys, and students to meet, and former Texas Law Review members to reunite. At this year’s banquet, the Texas Law Review Association honored Chief Justice Wallace Jefferson, ’88, of the Supreme Court of Texas, awarding him the Association’s highest award—the Leon Green Award—in recognition of his outstanding contributions to the legal profession. In addition to Stevens and Jefferson, 479 people attended, including many other federal and state judges, notable UT Law alumni, and respected practitioners from around Texas and the United States.

Justice Stevens, born in Chicago, Illinois, received an AB from the University of Chicago and a JD from Northwestern University School of Law. He served in the United States Navy from 1942–1945 and was a law clerk to Justice Wiley Rutledge of the Supreme Court of the United States during the 1947 Term. He was associate counsel to the Subcommittee on the Study of Monopoly Power of the Judiciary Committee of the U.S. House of Representatives, 1951–1952, and a member of the Attorney General’s National Committee to Study Antitrust Law, 1953–1955. He was second vice president of the Chicago Bar Association in 1970. From 1970–1975, he served as a judge of the United States Court of Appeals for the Seventh Circuit. President Gerald Ford nominated him as an associate justice of the Supreme Court, and he took his seat on December 19, 1975.

Chief Justice Wallace Jefferson, a 1988 graduate of the University of Texas School of Law, was appointed to fill an interim term as chief justice on September 14, 2004, by Governor Rick Perry and was confirmed unanimously by the Texas Senate on March 9, 2005. He was elected chief justice in 2006 and reelected to a full term in 2008. Chief Justice Jefferson joined the Court from private practice in San Antonio. As a partner in the appellate-specialty firm Crofts, Callaway & Jefferson, he successfully argued two cases before the United States Supreme Court.  He is a member of the American Law Institute and is certified in civil appellate law by the Texas Board of Legal Specialization. He served as president of the San Antonio Bar Association in 1998–99 and was named the San Antonio Young Lawyers Association’s Outstanding Young Lawyer in 1997. He received the “Pillars of the Foundation” award by the North Side Independent School District and is the namesake for the Wallace B. Jefferson Middle School in San Antonio. He has served as a director of the San Antonio Public Library Foundation and the Alamo Area Big Brothers/Big Sisters, and served on the education committee of the San Antonio Area Foundation.

This year’s banquet also included the presentation of note awards and outstanding editor awards, recognition of the Volume 90 and the Volume 91 editorial boards, and remarks from the Twenty-Fifth Anniversary Editorial Board.