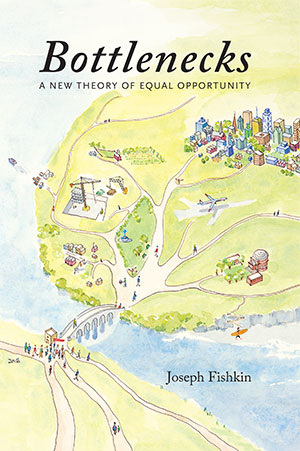 Assistant Professor Joseph Fishkin’s newly published book, “Bottlenecks: A New Theory of Equal Opportunity,” proposes ways of changing the opportunity structure to make it less constraining and less unequal. In the book, published in February by Oxford University Press, “bottlenecks” refer to narrow places through which one has to pass in order to reach many opportunities that open out on the other side. The following Q-and-A is an entry point into Fishkin’s contribution to the timely conversation happening now in contemporary politics and law about equal opportunity.

Which “bottleneck” in today’s society do you think deserves the most scrutiny?
I’d have to say class. There are lots of obvious bottlenecks we’ve all had to pass through in our own lives: the SAT, a college degree, the bar exam. But there are other bottlenecks that shape the opportunity structure in our society that don’t look like that. I think class is the most serious. Employers don’t go around saying “nobody who grew up poor need apply.” But in so many subtler ways than that, growing up wealthier opens up a lot of different paths in our society. That’s the sense in which class itself is a bottleneck, and it’s one that Americans are only beginning to grapple with.

As a law professor, how does your approach to researching and writing about equal opportunity differ from that of say, an economist?
In the book, I actually draw on a lot of studies by economists as well as sociologists, psychologists and even some biologists. But my own project is not empirical. I’m not studying a particular bottleneck or two and testing how difficult it is to get through. Instead, what I’m doing in the book is building a new framework for thinking about opportunity. Law professors like to think of ourselves as generalists, capable of learning about and drawing from many areas of law and public policy in our work. I may not always live up to that, but this book definitely does. The book’s argument has implications not only for anti-discrimination law, but also for education law and policy (both K-12 and higher), economic policy, health policy and a number of areas of social policy. This made writing it a lot of fun, and it meant I had to learn a lot along the way.