Nicole Cásarez ’79 on “The Joy of Lawyering” 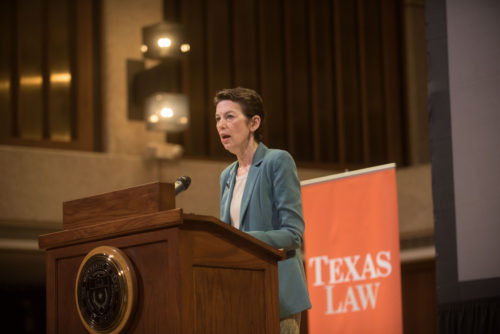 The Class of 2020 spent their first morning of law school with an all-star collection of Texas Law luminaries, including Dean Ward Farnsworth and Associate Dean Robert Chesney, and they took the Oath of Professionalism, administered by the Hon. Debra Lehrmann ’82, Associate Justice of the Texas Supreme Court. But the emotional highlight of the morning was a heartfelt talk on “The Joy of Lawyering” presented by Nicole Cásarez.

Cásarez, winner of Texas Law’s Distinguished Alumna for Community Service Award in 2014, is well-known for her eight and a half year quest save an innocent Anthony Graves from Texas’ death row. Her 2006 victory in that case, and the public role she and Graves have played in the years since advocating for reform and accountability in the judicial system, have made her a powerful inspiration to Texas Law students.

The Joy of Lawyering

As a communication law professor, I have always tried to keep up with communications technology. As a result, I’ve been on Twitter longer than the Real Donald Trump — I know for sure because I checked. And if you follow me on Twitter, one of the tweets you’ll see from time to time is “Another day, another day I’m glad that I’m a lawyer.”

Usually, what’s happened is that a colleague, a friend, a student, a family member, an acquaintance has contacted me because they have a problem and I’m the only lawyer that they know.  Sometimes I can give them some advice, sometimes I call around and refer them to another lawyer,  sometimes, unfortunately, I have to tell them it’s too late — they’ve made a misstep or been scammed or have fallen prey to some other pitfall that lawyers are equipped to avoid. Whether I help them, send them on, or break them the bad news, it’s another day I’m glad that I’m a lawyer.

Being a lawyer has given me a great deal of happiness and personal satisfaction. To prepare for this talk, I’ve thought about and tried to articulate exactly what about being a lawyer makes me happy — and I’ve come up with 3 things.

1. First — law is an intellectual profession. You get to use your brain every day. I love that.  I’m sure that appeals to you, too  —  after all, you must be brilliant, you got into UT Law School.

But  I remember that, when I was a first year law student, one of our professors told my class that we had never learned to read properly; that to be a lawyer, we would have to develop the discipline to read difficult material carefully. I didn’t like being told that, but of course he was right — and law school taught me that discipline. It also taught me how to structure and evaluate arguments. It made me a better reader, a better writer and  a better thinker.

Law is an enormous universe of intellectual challenges, but once you’ve honed those basic analytical  skills, you can learn to do almost anything within that universe and a lot of other ones.  I’d point you to my own experience as proof — I started doing corporate securities law for a small firm in Dallas. I moved to Houston and accepted a job at a big firm where I did public law and public finance. After a few years, I decided to go into academia, where, over my teaching career, I have taught business law, media law,  1st Amendment law, privacy law, constitutional law and the law of wrongful convictions.  As a professor, I’ve also done some pro bono representation: I helped a man wrongly convicted of a felony get his law license back; I helped a woman wrongly charged with a felony get her children back.

Most notably, I spent 8 1/2 years representing death row inmate Anthony Graves — which meant I had to learn death penalty law, federal habeas law, Texas criminal law, Texas criminal procedure and basic trial practice. I knew very little about those areas of law — certainly not enough to hold someone’s life in my hands —  but I possessed the skills to learn.

And, let me make clear, when I worked on Anthony’s case, I didn’t work alone; I had the help of other lawyers. Look around the room today — here at UT Law School you will develop a network of future colleagues who you can turn to for help and support when you need it.

One of the points I’m trying to make here is that if somewhere down the road you realize you’ve made a wrong turn and that your law job isn’t making you happy — you can change.

Change can be hard and sometimes very frightening, but you’ll have the necessary skills and connections to make it work. As a lawyer, you have no reason to stay in a job that doesn’t bring you happiness. You can always use your finely-tuned brain in a different way.

This dates back to when I was a 17-year-old reporter intern at the Fort Worth Star-Telegram.  The editors who supervised me were all older men who were, in my eyes, blunt, mean and quite terrifying.  One day, I wrote a story that included a quote from a source who described a local real estate developer as a “slumlord.” My editor took the quote out, and when I objected he said “well, we’ll have to ask the lawyer when he’s here this afternoon.” What I noticed when the lawyer arrived was that my scary editors were scared of him. They treated him with respect — they said “yes sir” and “no sir.” Whatever the lawyer said, they did  — and my teenaged brain said “I want to be that guy.”

As an aside — this year, you’ll take courses in torts and constitutional law, where you’ll learn how to determine whether my quote could stay in my story, or whether it had to come out.

My desire for respect may have had to do with my era — that in those days, it was harder for women to be taken seriously in the professional world. That law degree helped ensure that I wouldn’t be belittled or put down by anyone.

Although times may have changed, I’ve still been in situations where my opinion has been discounted; where someone who doesn’t really know me has said “Well, what do you know about [Title IX] or [real property] or [taxes], you’re an academic.” Selfishly, it brings me a lot of satisfaction to be able to say, “Actually, I’m a lawyer.”  What’s even better is if that person responds with “Yeah, okay, well, where did you go to law school?” and I get to say “the University of Texas.” That shuts them up. Later, I’ll go home and tweet “Another day, another day I’m glad that I’m a lawyer.”

Seriously, though — respect may come with the job, but it won’t remain unless you earn it. It’s easily lost if your character or your work doesn’t deserve respect, so we can never take it for granted. And yes, we’ve all heard plenty of disrespectful lawyer jokes, but in my experience, no one jokes about lawyers when they’ve been sued, or injured on the job, or when their child has been arrested.

3. And that brings me to the 3rd and most important way that lawyering has brought me joy. I know it sounds clichéd and cheesy, but it’s still absolutely true: I have found no greater happiness than in being able to help those who desperately need help, with no expectation of payment or benefit in return.

My personal legal hero, Justice Ruth Bader Ginsburg, agrees with me on this. Last month, she addressed law students at George Washington University, where she said “I can say that in my life as a lawyer, I gained greater satisfaction from things I wasn’t paid to do than what I got a paycheck for.”

It’s easy to talk about the need for policy reform and to put the blame on politicians  — but what about our individual responsibility to work for justice on a case-by-case basis? After all, lawyers operate our criminal justice system from top to bottom, as public defenders and criminal defense lawyers, as prosecutors, as judges.

And as lawyers, we ALL possess the keys to the clubhouse — we have the special tools needed to right individual wrongs that otherwise would go uncorrected.  Anthony Graves had many supporters when I crossed his path. He had friends and family members, he had pen pals all over the world and supporters who came to visit him from Europe. He sent letters to activist groups, politicians, and even celebrities, seeking their help.

But none of them could do what was needed — to get his conviction reversed in court and represent him at a retrial so as to keep the state of Texas from executing an innocent man. Only lawyers could do that. Working to free him, I saw first-hand how the criminal justice system is flawed. In the back of my mind, I feared that we’d probably lose. The system was stacked against us.

That we won doesn’t mean that the system works. The fact that we won was nothing short of a miracle. That made the happiness I experienced on Oct. 27, 2010 all the sweeter, when I went to the jail to tell Anthony that after 18 1/2 years, he was a free man.

It’s easy to be happy when you pull off a big win. But let’s say that we had lost. Anthony would be dead, and I would grieve for him and for our system. I would be unbearably sad and traumatized.  Nevertheless, I would still be able to look at myself in the mirror knowing that I had stood up for the truth, and had done everything in my power to act as an instrument of justice. I would still have the satisfaction of having done the right thing. In that sense, you might say that winning was the icing on the cake — extremely delicious icing, it’s true, the best icing ever — but what was important for my heart and soul was that I had done the work.

Will you be willing to help other humans who need, but can’t afford, your services? Will you see an injustice and nevertheless turn away? Will that bring you any joy?

I’m not saying that we must all devote our lives to public service, and we certainly all need to earn a living so that we can pay our bills. But if you’re willing to say, once in a while,  “Yes, I can help”  when you’re confronted with an injustice, you’ll be using your intellectual skills in a way that will bring you the respect of others, as well as great personal satisfaction and happiness.  And you too will be able to say “Another day, another day I’m glad that I’m a lawyer.”

To the University of Texas School of Law class of 2020, congratulations,  and may the study and practice of law bring you as much joy as it has brought to me.