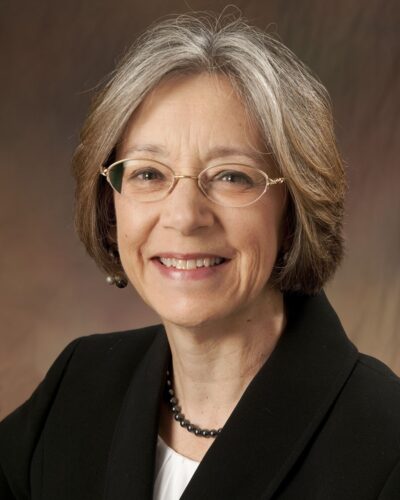 Diane P. Wood ’75, Senior Judge of the United States Court of Appeals for the Seventh Circuit, has been named the new Director of The American Law Institute. The announcement was made yesterday by the ALI president David F. Levi. Judge Wood, who will be the first woman to lead the century-old organization when she assumes her new role on May 1, will succeed Richard L. Revesz.

“Judge Wood embodies our Texas Law tradition of excellence,” said Dean Bobby Chesney, a member of the Institute since 2007. “The directorship of the American Law Institute is one of the most illustrious and influential roles in the country’s legal system and requires a leader with outstanding ability and judgment. As a brilliant jurist and scholar, Judge Wood is perfect for this role.”

The ALI is the leading independent organization in the United States producing scholarly work to clarify, modernize, and otherwise improve the law. Among its main projects are the Restatements of Law, Model Codes, and Principles of Law, which the ALI drafts, discusses, revises, and publishes. These volumes are enormously influential in the courts and in legislatures, as well as in legal scholarship and education.

Ward Farnsworth, who served as Dean of the School of Law for the decade ending in 2022, also was Reporter during that period for the ALI’s Restatement Third, Torts: Liability for Economic Harm. He described Judge Wood as an ideal choice as Director.

“Diane Wood fits the bill perfectly,” Farnsworth said. “She’s established herself both as one of the nation’s most respected academics and one of its most respected federal judges. That gives her a unique ability to pull together theory and practice in the best traditions of the ALI.”

The School of Law has a long history of association with the ALI. As did Farnsworth, former Dean and UT President Bill Powers served as an ALI Reporter, for the Third Restatement of Torts. Current faculty member Andrew Kull was Reporter for Restatement Third: Restitution and Unjust Enrichment, which was completed in 2010. And longtime faculty member Charles Alan Wright was the ALI’s President from 1993-2000.

In addition, current faculty members Professors Linda Mullenix, Charles Silver, and Jay Westbook have held major roles on ALI projects. Twenty-nine members of the Texas Law faculty are members of the ALI, while alumnus Wallace Jefferson ’88, the former Chief Justice of the Texas Supreme Court, is serving as the ALI Treasurer.

“I am deeply honored to have been chosen as the seventh Director of The American Law Institute,” said Judge Wood. “In my time as a member, I have worked with several of the previous directors. All of them were remarkable, and I recognize that the ALI’s directors have set a very high standard.

“The work of the ALI in simplifying and restating the law is as important today as it was in 1923 when the Institute was founded. By making the law more coherent and knowable, the ALI seeks to promote the rule of law in this country and beyond. We also bring to bear the perspective of the academy, the judiciary, and the practicing bar on some of the toughest and most consequential legal issues our country faces. It is a great privilege for me to become Director as the ALI looks forward to its next 100 years of service to the legal system.”

Judge Wood was appointed to the Seventh Circuit in 1995 and served as its Chief Judge from 2013 to 2020. She is also a Senior Lecturer in Law at the University of Chicago Law School.

Before being appointed to the bench by Pres. Bill Clinton in 1995, Judge Wood was the Harold J. and Marion F. Green Professor of International Legal Studies at the University of Chicago Law School. She also served for two years as Deputy Assistant Attorney General in the Antitrust Division of the U.S. Department of Justice, with responsibility for the Division’s international, appellate, and legal policy matters. In 2015, Judge Wood received the U.S. Department of Justice’s 2015 John S. Sherman Award, the department’s highest antitrust honor.

She received both her B.A. (Plan II) and her J.D. from The University of Texas at Austin. After law school, she clerked for Judge Irving L. Goldberg of the U.S. Court of Appeals for the Fifth Circuit and for Associate Justice Harry A. Blackmun of the U.S. Supreme Court.

In 2010, Judge Wood received the Outstanding Alumna Award from the Law School Alumni Association. In 2010, she accepted a leadership role for the Texas Law Review Association (TLRA), the governing body of the Texas Law Review, becoming president and completing the term of Greg Coleman ’92, who had tragically perished in an aviation accident.

“Judge Wood proved to be one of the Texas Law Review Association’s best leaders,” said Scott Atlas ’75, a former TLRA president and an emeritus member of the TLRA Board of Directors. “In the midst of the anguish around Greg’s passing, she provided steady, thoughtful, and compassionate leadership. She also led significant accomplishments for the Review, such as improving its business operations and increasing funds for scholarships.”

After completing Coleman’s term, she served a full term of her own, stepping down in March 2012. At the TLRA 100th Anniversary banquet in 2022, Judge Wood was honored as one of five “legal giants” of the Review’s history, alongside Leon Green, Steve Susman, Charles Alan Wright, and Dean W. Page Keeton. 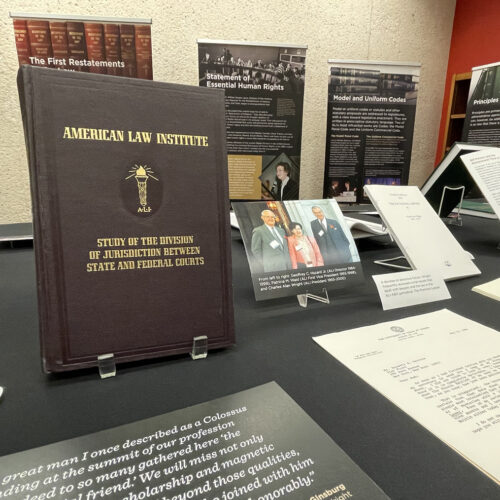 Judge Wood’s appointment to the director role is yet another proof point of the strong connection between Texas Law and the ALI. This year, Texas Law is one of just four law schools that has been chosen to host a temporary museum exhibit honoring both the Institute and its 100 years of service to the legal profession and legal academy, as well as its Texas Law ties. The exhibit features Judge Wood, alongside all the reporters and contributors listed above.