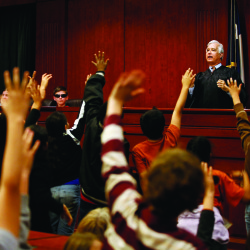 On Saturday, March 2, 2013, from 11:00 a.m. to 5:00 p.m., the University of Texas at Austin will host “the biggest open house in Texas”—Explore UT. This annual event is a hands-on introduction to the University to schoolchildren from kindergarten through high school through a variety of events, performances, lectures, exhibits, and other activities.

The William Wayne Justice Center for Public Interest Law will present Marie-Therese Connolly as the Law School’s second G. Rollie White Public Interest Scholar in Residence, February 18-21, 2013. Connolly, who recently received a MacArthur Foundation “genius” fellowship for her work to prevent elderly abuse, is a senior scholar at the Woodrow Wilson International Center for Scholars, and is formerly the director of the U.S. Department of Justice’s Elder Justice and Nursing Home Initiative. During her time at the Law School, Connolly will make two presentations that are free and open to the public.

The Bernard and Audre Rapoport Center for Human Rights and Justice at the University of Texas School of Law is pleased to announce its ninth annual conference, “Impunity, Justice, and the Human Rights Agenda,” to take place February 7–8, 2013. This year’s conference will bring together scholars, human rights advocates, and policy makers from around the world to assess critically the human rights movement’s focus on anti-impunity.

Lives in the Law: Pamelya Herndon, ’78, executive director of the Southwest Women’s Law Center, to speak on her work advocating for the rights of women and girls February 5, 2013

“Is America Governable” conference to take place at the Law School, January 24–26, 2013

The Law School will host a conference, “Is America Governable?” on January 24–26, 2013. It will bring together a remarkable array of scholars across many disciplines, people with a variety of high-level political experience, and eminent journalists to discuss the apparent dysfunction of the U.S. government, and possible remedies for it.

National student loan expert Heather Jarvis will address public service professionals and students from UT Law and other Texas law schools in the Charles I. Francis Auditorium on February 1, 2013. This is her second consecutive year to present “Public Service Loan Forgiveness in Five Easy Steps” during the annual Public Service Career Fair, the largest public service legal job fair in Texas. This year she will also cover the details of President Obama’s new Pay As You Earn Repayment Plan, including how borrowers can determine whether they qualify.

The 2013 Texas Energy Law Symposium is the Texas Journal of Oil, Gas, and Energy Law’s eighth annual symposium focusing on current energy topics and featuring presentations by prominent practitioners in the industry. Speakers are leading academics and practitioners in oil, gas, and energy law. The symposium will be held Thursday and Friday, January 17 and 18, at the Etter-Harbin Alumni Center on the University of Texas at Austin campus (2110 San Jacinto, across from DKR Memorial Stadium). 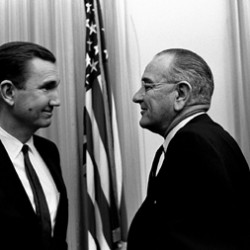 Ramsey Clark, who served as attorney general under President Lyndon B. Johnson, will present a talk entitled “From Civil Rights to Human Rights” on Monday, November 12, 2012, from noon to 1:00 p.m. in the Law School’s Eidman Courtroom. Lunch will be served in the Jamail Pavilion at 1:00 p.m. The event is free and open to the public.

The University of Texas School of Law is once again hosting the Information Technology Law and Energy Law module for the University of St. Gallen’s Executive Master of European and International Business Law MBL-HSG program from October 28 to November 2, 2012. Since 2001, the Law School has participated in this program, which holds a strong position in the landscape of executive law studies in Europe.